The episode ends with Romana visiting the shrine and meeting Farhad. She asks him to pray for her but he tells her he doesn’t know how to. 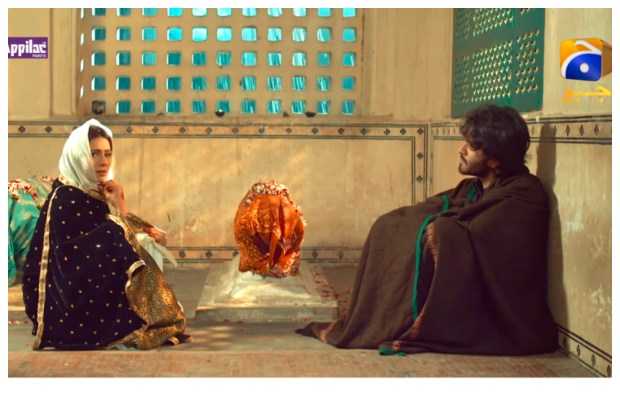 The latest episode of KAM begins with Mahi’s parents leaving for their home. Her parents tell her to take care of herself while her mother asks her to visit home soon. She bids a cold farewell to Taimoor’s mother to indicate that she’s just as disappointed in her as she is with them.

An old poet stumbles inside the shrine and sits next to the peer. He asks him to pray for him and in return, he would happily read out a few lines of his poetry for them.

Mahi gets Sikandar’s kids ready for school. His daughter tells Mahi she wants to be like her when she grows up but Mahi quickly stops her. She says the two of them will have a much better future than her. Sikandar listens to the whole thing but is happy how his kids have become familiar with Mahi.

Farhad’s mother sits in their house’s courtyard and keeps looking at the staircase hoping Farhad will come down any second like he used to and hug her. Farhad’s brother Jawad, asks his father that he should rest while he will take over his duties at his workplace. Their father refuses for that to happen and tells Jawad he has a lot of dreams for him and he doesn’t want Jawad to end up like him. The two also shed a tear for Farhad.

One of the maids shows Mahi the open air space where Taimoor used to have his evening tea. Mahi asks the maid why the peer didn’t come inside the house the other day. The maid tells her the peer is a very learned man and Taimoor’s mother and Sikandar used to visit the shrine often while Taimoor didn’t believe in those things.

Just then, Mahi hears Sikandar having an angry conversation with someone over the phone. Sikandar tells her it’s all good and there’s nothing to worry about. He leaves the city for a few days but asks Mahi to take care of the house and kids before leaving.

Romana tells Chanda that she is scared for her future with Sikandar and she wants to see the man they met in the train, the one who she has seen often. She thinks he is the only one who can pray for her.

Sikandar calls Mahi and asks her to look for a file in his cupboard. That’s when she finds a picture of Romana and a letter that was addressed to Sikandar. She immediately recalls it is the same woman who she met on Taimoor’s memorial service.

Taimoor’s mother misses her son dearly. She looks at her photo and gets so overwhelmed that she passes out on the bed. Mahi calls the doctor who tells her Taimoor’s mother shouldn’t take stress of any kind for the next few days.

The episode ends with Romana visiting the shrine and meeting Farhad. She asks him to pray for her but he tells her he doesn’t know how to. She says he is the only one who can pray for her to which he says from then on, she will always be in her prayers.

To find out what happens in the next episode, keep watching KAM everyday Friday at 8 pm only on Geo TV.