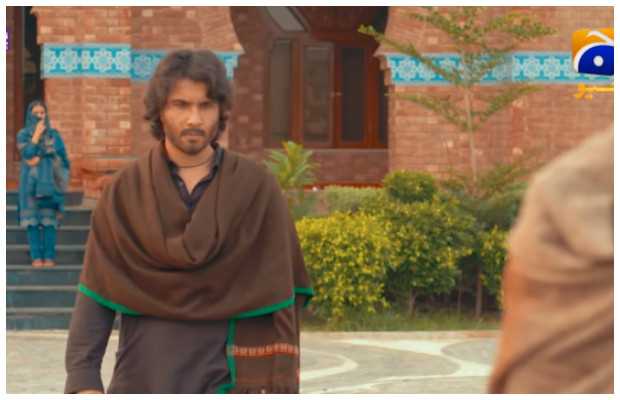 Khuda Aur Mohabbat has been on a spree of putting out one amazing episode after the other. The latest episode begins at the shrine where the faqeer is talking to his followers who sit around him. He talks about the loved one has for their lover. He is reminded that the lady of the mansion (Sikandar’s mother) wants him to come over for making prayers for the family. He tells Farhad he should come with him too.

Rida tells Mahi that she is moving to London in two weeks with her husband and will miss her. Sikandar’s kids come into her room because they couldn’t sleep. They ask Mahi to tell her a story and she agrees.

Sikandar comes home and watches quietly while Mahi reads the kids a story.

The faqeer arrives at the mansion along with his followers including Farhad and they sit outside the house in the lawn. Unbeknownst to Farhad that this is in fact where Mahi was married. This is the only reason why the faqeer brought him there in the first place.

When she hears about it, Sikandar’s mother gets up from her bed and begins leaving the room to meet the faqeer. Mahi tries to stop her because the doctor has advised her to rest but Sikandar’s mother has a huge outburst on Mahi and ridicules her which Rida sees when she comes to look for Mahi again.

Sikandar’s mother meets the faqeer and asks her to come inside the house so she can be a good host. He refuses and asks for nothing else but water. She tells him to ask for anything and when she agrees, he tells Sikandar’s mother that he is taking her word with her and will ask for what he wants at the right time.

Rida asks Mahi why she is tolerating all of that hatred anger without any rhyme or reason. She says she has become used to it because it happens all the time. Rida says you’re not their slave but Mahi tells her sometimes you have slavery written in your destiny.

Mahi goes to look for Sikandar’s mother because she has been gone for long. She arrives just when the faqeer and his men are leaving and Farhad has his back on her. The two come so close to meeting each other but looks like it isn’t meant to happen yet.

Mahi’s mother is worried for her and remains restless while thinking about how she must be there. Mahi’s father tells her it is just a matter of another month before she will return home.

Romana keeps waiting for Sikandar but Chanda tells her he will never take her away from there.

The episode ends with Rida confronting Sikandar about the ill-treatment Mahi has to suffer in their house. She says Mahi has devoted herself to looking after the family but forget acknowledgment, she hasn’t even received the respect and status that she deserves. Sikandar tells them he will bring it up with his mother who was never like that. Mahi breaks down when she hears about her situation from someone else and leaves.

When will Mahi and Farhad finally meet? Will they ever meet? Will Sikandar’s mother accept Mahi as her daughter-in-law or will Mahi leave as soon as her iddat is over? To find out, keep watching KAM every Friday at 8 p.m. on Geo Entertainment.