The episode picked up from where it left off in the last one. Farhad is in disbelief after he sees Mahi at the shrine. He leaves as soon as Mahi’s mother-in-law comes to see what has happened to her as she lays unconscious on the ground.

Sikandar finds out Romana has left the city and has left behind a note for him, telling him she will never return again. She looks for her but it is to no avail.

Mahi’s mother arrives at her in-laws’ place to take her away but is livid when she finds Mahi is unwell. She blames her mother-in-law for using Mahi as a way of getting revenge for her son. Once Mahi wakes up, she tells them nothing will happen to her because she has not one but two mothers, and unites them. 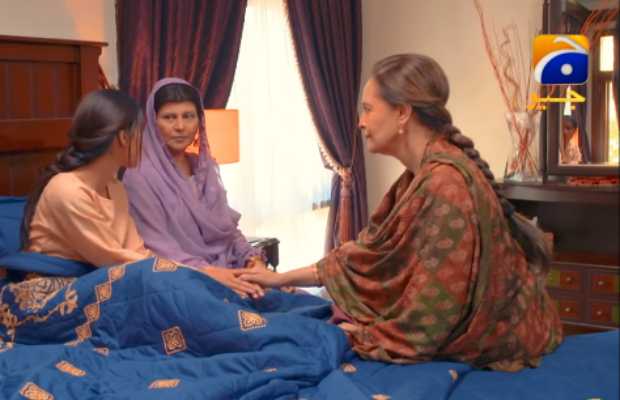 Romana moves into another place with Chandaji and decides to stitch clothes for people in the neighborhood to earn money and run the household.

Mahi tells Sahiba, her sister-in-law, about Farhad being alive and how she ran into him at the shrine. She also tells her about the state he was in, how he has left everything for her and has turned into a gypsy.

The faqeer, who knows everything about Mahi and Farhad, sends him to Mahi’s in-laws’ place with holy water. Once he is there, Mahi and Sahiba see him again.

Farhad finally learns that this is where Mahi lives and the episode ends with his stunned expression upon seeing her again.

What will happen in the next episode? Will Mahi’s mother take her away or will she present a proposal of Mahi’s marriage with Sikandar to her mother? Will Mahi and Farhad ever be together? Keep watching this space to find out. KAM airs on Fridays at 8 PM on Geo TV.