The show has definitely picked up its pace with a lot of developments happening at the same time. 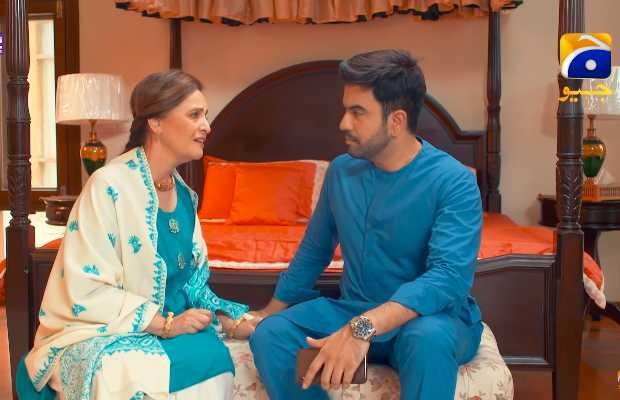 In the latest episode of Khuda Aur Mohabbat, Mahi (Iqra Aziz) and Sahiba (Sunita Marshall) still stunned from seeing Farhad (FerozeKhan) standing in front of them, watch in horror as he interacts with Mahi’s mother-in-law (Hina Bayat). He hands her the holy water and amulet that the faqeer of the shrine has sent for her. She tries to stop him but he leaves abruptly.

Mahi is distraught and asks Sahiba to tell Farhad to return home because she can’t deal with any of that anymore. She can’t see him like that.

Farhad learns of Mahi’s husband’s death and remembers how he had wished for her to be miserable all her life. He immediately confronts the faqeer for sending him to the haveli because he knew about it. Farhad says he had killed himself in her eyes, and it should have stayed that way. The faqeer says there’s no point in running away from his fate.

Mahi’s mother sees how the Sikandar’s kids love Mahi and have become fond of her. This further increases her confusion.

Mahi’s mother tells her father, Kazim Shah, to come to Multan for a few days because Mahi isn’t well enough to travel. He asks Nazim Shah who is of the same opinion because he wants to participate in the next elections from Multan because of Sikandar’s immense influence in the area.

Two men from the neighborhood come over to Romana and Chanda’s house to pry in their matters. Chanda used the name of the city’s SHO to scare them away but knows living in that neighborhood won’t be easy.

Mahi’s mother-in-law asks Sikandar if he accepts Mahi as the mother of his children. He is apprehensive about marrying her but agrees no one will love his children more than her. He says we should ask her before we move forward with anything.

The episode ends with Mahi telling Sahiba that she wants to meet Farhad before they leave for Bahawalpur.

The show has definitely picked up its pace with a lot of developments happening at the same time. The performances remain first-rate as always.

Will Mahi agree to marry Sikandar? Will things change when she meets Farhad? Only time will tell. To find out, keep watching KAM on Fridays at 8 PM on Geo TV.