Khuda Aur Mohabbat Ep-29 Review: Mahi gets a chance to talk to Farhad

What will happen now as Mahi has realized that she loves Farhad? 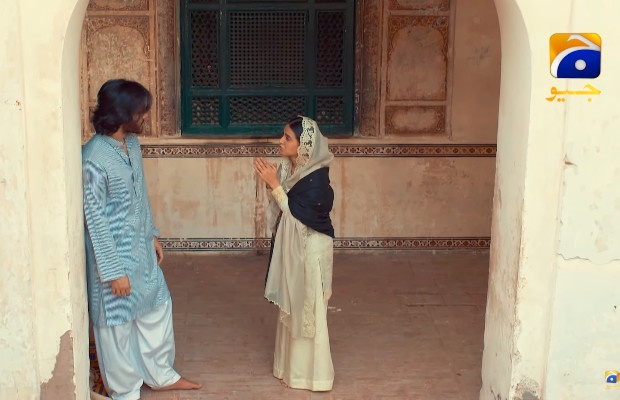 Sikandar and Mahi’s mothers along with the two of them go to the shrine. While everyone is busy paying their respects, Mahi goes to meet and talk to Farhad.

Mahi pleads with him to stop living like this and to get on with his life. But Farhad doesn’t care about anyone else including his family and his life back home. He still wants her and nothing else.

Unable to convince him and because of his stubbornness, Mahi takes off the amulet he brought for her from the shrine to keep her safe and gives it back to him. She tells him she will only wear it once he listens to her.

Sikandar arrives looking for Mahi just when she is walking away from Farhad with Sahiba. Once they leave, he asks Farhad about Romana’s whereabouts. Sikandar tells him to deliver his message to Romana that he is looking for her.

Mahi’s father, Kazim Shah, and her brother Nazim Shah arrive at her in-laws’ place to take her away from there. On her mother-in-law’s insistence, they agree to spend a few days at their place.

The men of the families sit and plan about Nazim Shah’s political campaign that he wants to begin in Multan. They tell Sikandar they want his help and he promises to support them unequivocally.

Mahi’s mother tells Kazim Shah about how Mahi’s mother-in-law wants her to marry Sikandar so she can continue living there as her daughter-in-law.

Mahi tells Sahiba that she wasn’t at peace before meeting Farhad but now that she has, it’s as if she’s walking on a path laden with thorns. Seeing her unease, Sahiba tells Mahi to admit that she loves him too.

What will happen now as Mahi has realized that she loves Farhad? Will she agree to marry Sikandar? Will everyone find out about her and Farhad? To find out, watch this space and keep watching Khuda Aur Mohabbat on Fridays at 8 pm on Geo Entertainment.