Farhad has developed some strong feelings for Mahi and it is difficult for him to take her out of her mind. 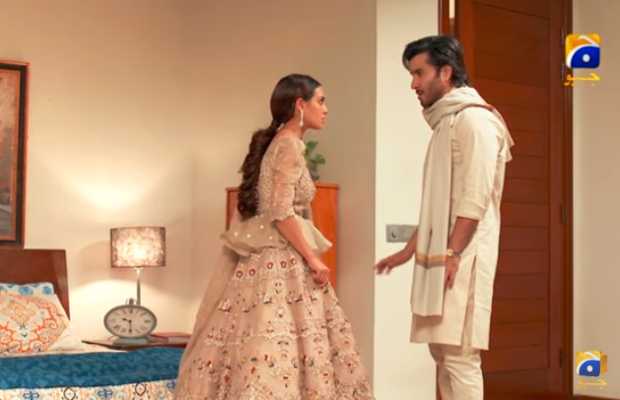 Khuda Aur Mohabbat is now 4 episodes down, and with each episode, it is making us fall more and more in love with it. Phenomenal performances, brilliant cinematography, meaningful dialogues, superb production value, and great direction make it a complete package and a treat to tune in to every Friday on Geo Entertainment.

Last night’s episode was also nothing short of intriguing as it set the stage for what is yet to come while also giving us further insights related to Mahi and Farhad’s contrasting feelings.

Farhad (Feroze Khan) has developed some strong feelings for Mahi (Iqra Aziz) and it is difficult for him to take her out of her mind. His smile, his eyes, and his body language all radiate his love for Mahi and that is what his friends also notice. They suggest him to voice out his feelings in front of Mahi before the end of all the festivities and before she returns to her city. Farhad tries time and again to do that but fails to get Mahi’s attention. In one of the most important encounters between the two, Mahi tells him to leave her room very sternly, misunderstanding his intentions of trying to talk to her.

Mahi has no feelings for Farhad, neither does she for once think about him. She only extended him a hand of friendship so that she could help Rida meet her fiancé and only realizes his presence when she needs something done. But, Farhad is a simple-minded guy who mistook her frankness with something else. Rida also senses his feelings for Mahi and she also seemed to genuinely like the way he helped her. Hence, she tries to talk to him but doesn’t get a chance. However, she tells him that he was now like a brother to her.

Rida’s father, Nisar Sahab, also is in appreciation of Farhad for the manner in which he managed everything for him. He tells Farhad that he should not underestimate his capabilities and that he was a gem of a person.

Meanwhile, we also get a glimpse of Taimoor Shah and Sikandar. Taimoor fell for Mahi on the railway station and have obtained information about her whereabouts too. Sikandar, who is the elder brother, has two kids too, and we get to know that their mother wants him to remarry. No details have been revealed about his wife.

Overall, it was an interesting episode that set the stage for the upcoming developments. Feroze Khan stole the show completely with his expressions and body language. He has done complete justice with his character and has owned it completely. His on-point performance has made us fall in love with Farhad and we are eagerly looking forward to his journey in the upcoming episodes.

Now that the wedding is over, Mahi will definitely leave for her city and the promo of the next episode suggests that Farhad will also leave to meet her and tell her about his love for her. Can’t wait to watch more of Khuda Aur Mohabbat!