The episode packed a lot of drama and emotion. 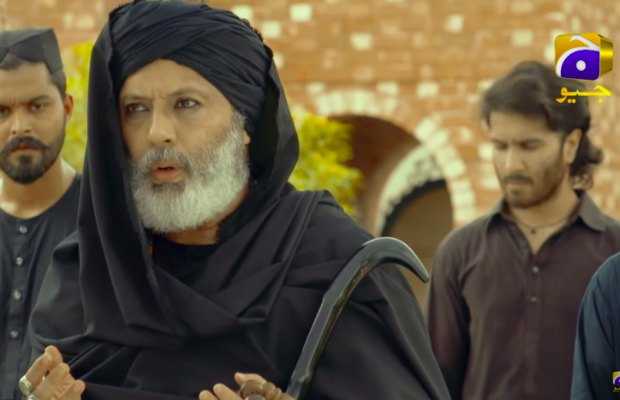 The latest episode begins with Taimoor’s mother asking Sikandar to not invite Mahi’s family for Taimoor’s upcoming memorial service. Sikandar explains to her that people will gossip if they do that. She reluctantly agrees but says he shouldn’t expect her to be cordial with them. She also says her son’s memorial will be Mahi’s last day in their house. Mahi listens to the whole conversation but says nothing.

Romana calls Sikandar but he disconnects her phone. Chanda, the brothel madam, tells her Sikandar should take her with her if he loves her so much. She says someone like her can’t go to live with a man of Sikandar’s respect and stature.

Sikandar comes to meet Romana and the two share few moments of peace and togetherness with each other.

At Taimoor’s chehlum, his mother doesn’t come to receive or welcome Mahi’s family. Mahi’s mother is offended by Taimoor’s mother’s cold and rude conduct. She tells Mahi they get insulted because of her but she doesn’t care about them.

Just then, Taimoor’s mother arrives and shares a rather unenthusiastic hug with Mahi’s mother so that people wouldn’t talk ill about the strained relationships between the two families.

Sikandar and his mother also distribute charity and clothes to the needy people of the city. Sikandar praises Mahi for her strength amidst all of the difficulties. Romana also shows up for the memorial service to see Mahi and catch a glimpse of Sikandar. When he sees her, Sikandar walks away and doesn’t talk to her. Romana tells Mahi she doesn’t need her charity. She just wants her to pray that she ends up at a mansion like hers. Mahi tells Romana mansions like that are for the destined ones.

The peer who sits at the shrine arrives at the mansion on Taimoor’s mother’s invitation to pray for Taimoor’s forgiveness. The peer doesn’t go inside and says he fulfilled his promise but won’t go inside.

Farhad comes along with the peer as well. Romana bumps into him and apologizes for Chanda’s rude behavior. He says he has forgiven her and says he is a faqeer just like all the others around them.

At the end of the day, when Mahi’s family is about to leave, Sahiba, her sister-in-law, asks her to come along with them. She asks her why she wants to live there when Mahi’s mother-in-law doesn’t want her to be there. Mahi tells Sahiba this is one promise that she made to herself and she wants to fulfill it to the very end. She says she won’t be the same Mahi anymore even if she leaves with them. She says the older Mahi died with Farhad.

The episode packed a lot of drama and emotion. We got to see some powerful performances by all the actors. Audiences were hopeful that Mahi and Farhad would bump into each other but it looks like it will happen at the right time and this episode wasn’t it. Will this happen in the next episode? To find out, keep watching Khuda Aur Mohabbat on Fridays at 8 pm on Geo Tv.