Geeti Princess is all set to win Shaams from Falak 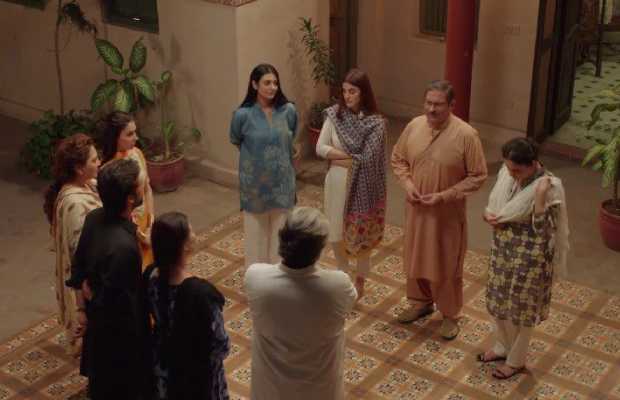 Laapata the newly started drama serial is three episodes down. Here it is established that Falak (Sarah Khan) is the only positive character while Geeti (Ayeza Khan) and Shaams (Ali Rehman) both are portrayed as grey characters. The interesting thing about the play is that it is gimmickry thus entertainment value is quite high. In the previous episodes, we have seen that Falak’s father refuses the idea of Falak and Shaams engagement. In this episode, Geeti Princess is all set to win Shaams from Falak.

No one is happier than Geeti on hearing Falak’s father’s refusal for Shaams and Falak’s proposal. There is a certain tension in the house between both the parents, particularly Shaams parents has taken this refusal as their insult. Instead of realizing the sensitivity of the situation and how reasonable Falak’s father’s objection is they are still angry.

Falak and Shaams are very upset about this refusal. Shaams instead of realizing his personal flaws also take this refusal as his insult. Moreover, Falak’s Appi warns Shaams to stay away from her sister as she knows that only love is not sufficient one needs to earn a decent living for married life. Well, Shaams also takes this as his insult, and Falak is also torn between Shaams and her parents.

Geeti is happy in her own world which is not less than a fool’s paradise. She thinks that whatever she wishes she will ultimately get. She is busy in making her TikTok videos. She is now all set to win Shaams from Falak as now she is thinking that her path is cleared. One thing she has no idea is that Shaams only loves Falak. She brings Palao for Shaams and Shaams in order to make Falak jealous starts being a little flirtatious with Geeti making her even more fancying about him. To be honest Shaams and Falak has no match but Shaams and Geeti share many similarities.

Shaams has indulged more in gambling and that Hakeem Sahab is trapping him more into this crime. He tries to cash his greed by offering him to play in an elite party where if he wins for him he can earn up to 25 Lakhs. Shaams is a person with no basic understanding, is not realizing that such shortcuts might bring him into a bigger mess all he wants is to get rich and that too overnight.

Well what we are anticipating happens eventually Shaams lost a bet in gambling where a Police Inspector has invested his money on him, now he is threatening Shaams to return his capital with an additional amount of 5 lakhs means Shaams has to arrange 20 Lakhs within 48 hours!

tweet
Share on FacebookShare on TwitterShare on PinterestShare on Reddit
Rameeza NasimAugust 5, 2021
the authorRameeza Nasim
Rameeza Nasim, a Paralian, passionate about poetry, drama and fiction. By giving drama critiques I feel like I am endorsing the writer's message to the audiences, I love my job. Being a critic responsibility lies on my shoulders to point out the flaws and shortcomings of the play be it on writer's , performers or director's end . I did my Masters in English Literature and Linguistics .
All posts byRameeza Nasim