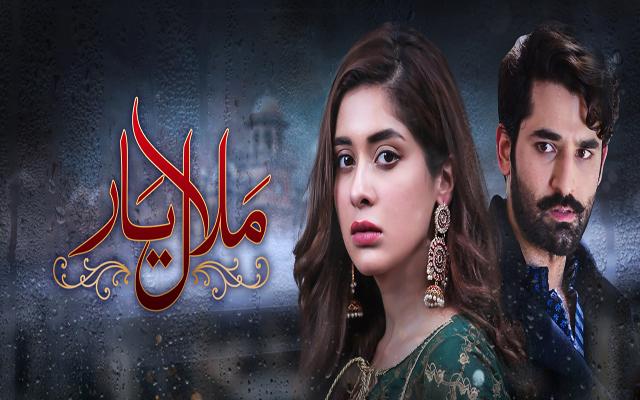 Malal e yaar is the drama serial which revolves around feudalism and its aristocracies. The writer Hina Huma Nafees has very intelligently depicted that feudalistic mindset in this play by engaging content. The portrayal of Balaaj’s character by Zain Baig is quite impressive, at the same time, Azeekah Daniel has also come up with an amazing performance.

The episode begins when Nikaah ceremony is about to begin, Balaaj has started portraying Hooriya as his property even before his nikkah. He snatches her mobile and warns her that she has to put an end to all her friendships after their marriage and she will do every thing accordingly to what he will tell her to do. He is celebrating his victory over her but, a little he knows that something big is cooking in Hooriya’s head.

Right before Nikkah Amber meets Balaaj. Well Amber’s mourning seems pointless here, she was not happy with her marriage, she loves Faiq and when she gets no choice she agrees to marry Balaaj but now she is acting like Balaaj is her first love. She is not ready to give up on him which seems a bit over. Amber asks Balaaj to honestly tell her when did he fell in love with Hooriya? did it happen when they met for the first time they or when she came to their house? Well, Balaaj bluntly replies that he does not love Hooriya and never will but we feel that he said that just to make Amber feel better otherwise he likes Hooriya, the way he looks at her it seems like he is greatly interested in her.

Balaaj, Bibi Jaan, Hooriya, Minhal, and Sayeda all visited the shrine just before Nikaah and there Sayeda has arranged for Hooriya and Minhal’s escape. She gives them Burqa and asks them to run away while making an excuse for going to the washroom in front of Bibi Jaan. They both run away in front of Balaaj although Balaaj wondered who these two burqa-clad girls are? Well everybody was shocked to learn that they have escaped. Balaaj calls Baba Sarkar who says that he wants the girls no matter what happened otherwise he wishes himself death, Balaaj swears that he will bring back the girls.

Meanwhile, Bibi Jaan suggests Baba Sarkar that they should marry Amber and Balaaj on which Baba Sarkar first gets irritated but then it seems that he is a bit convinced. Balaaj has realized that the two Burqa clad girls were Hooriya and Minhal, he starts chasing them on the road and there they find a bus in which they were sitting. Finally, Balaaj has caught them and they have failed to escape. However, it seems that brave Hooriya has not yet given up she snatches the pistol from a worker and holds it on Balaaj!

tweet
Share on FacebookShare on TwitterShare on PinterestShare on Reddit
Rameeza NasimOctober 3, 2019
the authorRameeza Nasim
Rameeza Nasim, a Paralian, passionate about poetry, drama and fiction. By giving drama critiques I feel like I am endorsing the writer's message to the audiences, I love my job. Being a critic responsibility lies on my shoulders to point out the flaws and shortcomings of the play be it on writer's , performers or director's end . I did my Masters in English Literature and Linguistics .
All posts byRameeza Nasim