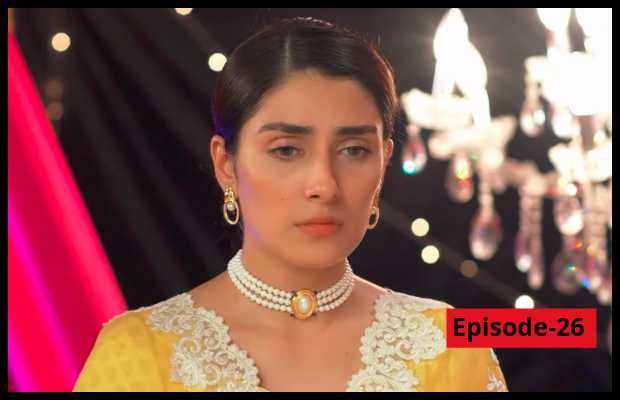 Meher Posh the drama serial airing at GEO Entertainment comes up with its another episode, now it seems that we are going to see more of sister rivalry as Shah Jahan’s mother is trying her best to feed Ayat’s mind against Mehru. This sister rivalry seems so ugly and disturbing. Danish Taimoor and Ayeza Khan’s performances are simply brilliant in this episode.

Ayat gets the reality check right at her wedding night. Before Shah Jahan coming into his room his mother is there brainwashing her mind against Mehru, telling her that if she has not married her in such a hasty manner Mehru would have married Shah Jahan. Shah Jahan overhears all this and he loses his mind and he gets furious on knowing that his mother is so against Mehru and marrying Ayat instead of Mehru is her deliberate attempt.

Shah Jahan is not ready to accept Ayat as his wife. He gives Ayat a reality check right at her wedding night by telling her that she does not have to expect anything from him, she does not have to come near to him and moreover he scolds her that why she is attired in a bridal outfit tells her to change her dress and never dare to dress up nicely in front of him. Well, it is so satisfying to see Ayat suffering like that, a selfish girl like her deserves this kind of treatment.

Ayat has got the idea that Shah Jahan is not happy with this marriage. All her bubble that Shah Jahan loves her busted in the air. She is extremely sad and disturbed, Shah Jahan is not talking with her on the next morning as well and he lefts for work early. On the other hand, Mehru cannot gather the courage to take breakfast for Ayat at Shah Jahan’s place, she makes an excuse that she is going for work. What will be the future of Mehru and Shah Jahan’s relationship as their love is forbidden after Shah Jahan and Ayat’s marriage?

tweet
Share on FacebookShare on TwitterShare on PinterestShare on Reddit
Rameeza NasimSeptember 28, 2020
the authorRameeza Nasim
Rameeza Nasim, a Paralian, passionate about poetry, drama and fiction. By giving drama critiques I feel like I am endorsing the writer's message to the audiences, I love my job. Being a critic responsibility lies on my shoulders to point out the flaws and shortcomings of the play be it on writer's , performers or director's end . I did my Masters in English Literature and Linguistics .
All posts byRameeza Nasim