Mera Rab Waris – Fate Seems to be with Haris and Ayesha for now!

This episode was yet another ride full of emotion! 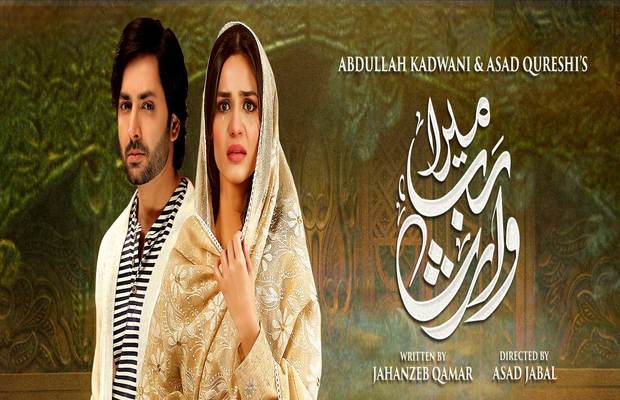 It has been long since we have felt the rush of a drama firing on all cylinders. With its star-studded cast, 7th Sky Entertainment’s Mera Rab Waris has been hitting all the right notes with a banger episode every week. Under the banner of Abdullah Kadwani and Asad Qureshi, the drama has been a hit so far, and for all the right reasons.

This week’s episode had us thinking that you can’t really put up a fight with what fate has in store for you. After Haris had decided to let Ayesha go, it was getting hard to imagine how the story will progress further. However, after a lot of thinking, his mother finally comes around when she realizes she might lose her son to this decision. As the families prepare for this unexpected wedding, it is heartwarming to see how everything seems to be falling in the right place for Ayesha and Haris.

Where Ayesha and Haris have been lucky in love, this is not the case for people who are in love with them. Faizi, who has adored Ayesha from afar for all his life, has never been able to admit it in front of her. As he realizes that he is losing Ayesha, he puts aside his own feelings and tells her that Haris isn’t a good match for her. It is refreshing to see that his heart is in a good place, and even if he can’t get her. His prodding in the matter doesn’t work though, and it looks like every obstacle in Ayesha and Haris’ way has been falling down itself. In the true sense – they are meant to be.

Unlike Faizi, Ayla who claims to be in love with Haris hasn’t been so generous in giving in. She tries her best to guilt trip him into feeling something for her, but she fails. Apart from Ayla, we have witnessed the grand spectacle of delusion, pettiness, and prejudice that was on display by Haris’ elder sister Kinzi. She has been trying her best to call off this wedding but looks like she’s been fighting a losing war here.

This episode was yet another ride full of emotion, with the drama moving ahead smoothly and powerfully with intense character interactions, a bold script, and the ensemble cast. Mera Rab Waris has been getting complex and meaningful with every episode, and we can’t wait to find out what is in store for Ayesha and Haris.