Hamza says he will never going to leave Hala 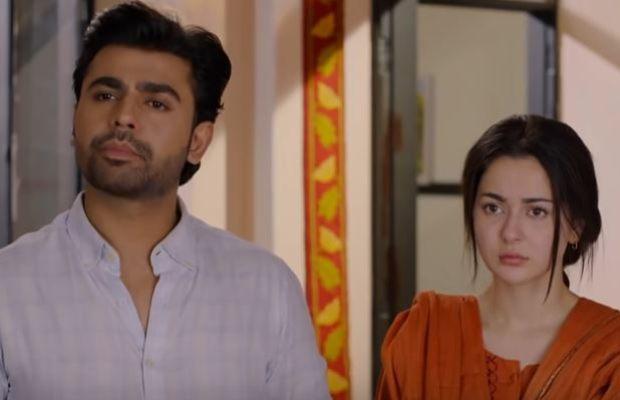 Mere Humsafar the drama serial airing at ARY Digital is one of the most engaging serials with all desi masala and fairy tale vibes. Farhan Saeed’s charming screen presence has added colors to this regressive serial. In the previous episode, we have seen that circumstances lead Hamza to have Nikkah with Hala in a very simple way in the mosque. In this episode, we see that Hala has Hamza’s back now he is there to take a stand for her.

Poor Hala seems to get into a bigger problem after getting Nikkahfied with Hamza. Shahjahan seems to lose her cool and she is getting violent at Hala. Hamza is there to protect Hala and one feels for the poor boy who is taking all pains of making everyone angry but the girl for whom he has taken all the stand is not even ready to accept him as her husband.

Well Hala’s point is valid too she has her reservations, no one accepts Dadi has accepted her Nikkah everyone else is against her how can she allow Hamza to come near to her in such an uncertain situation? However, our heart goes out for Hamza who is taking all this pressure for Hala. Dadi’s coming to the room giving her jewellery and telling her to adjust well looks so cute.

Shahjahan and Raees call Nafees and this time for the very first time it sounds like Nafees is taking his daughter’s side, well his abandoning Hala like that is still not making any sense which father does that? Raees forces Hamza to sign on divorce papers on which we for a second thought he will going to sign but he ends up tearing the page and telling his parents clearly that he will never leave Hala and better they should accept her.

Hala for the very first time has seen anyone taking a solid stand for her, she cannot believe her luck. Dadi always used to give her selective support. Hala’s heart skips a beat when Raees asks Hamza to divorce her. She looks so vulnerable when she asks Hamza if he is going to leave her? Hamza assures Hala that he will never ever leave her, and only death can make them apart. Hala has started falling in love with Hamza well who doesn’t fall for a person who stands like a rock in front of all. We are rooting for Hala and Hamza.

tweet
Share on FacebookShare on TwitterShare on PinterestShare on Reddit
Rameeza NasimMarch 25, 2022
the authorRameeza Nasim
Rameeza Nasim, a Paralian, passionate about poetry, drama and fiction. By giving drama critiques I feel like I am endorsing the writer's message to the audiences, I love my job. Being a critic responsibility lies on my shoulders to point out the flaws and shortcomings of the play be it on writer's , performers or director's end . I did my Masters in English Literature and Linguistics .
All posts byRameeza Nasim