Hala and Hamza's fairytale Valima takes place in this episode 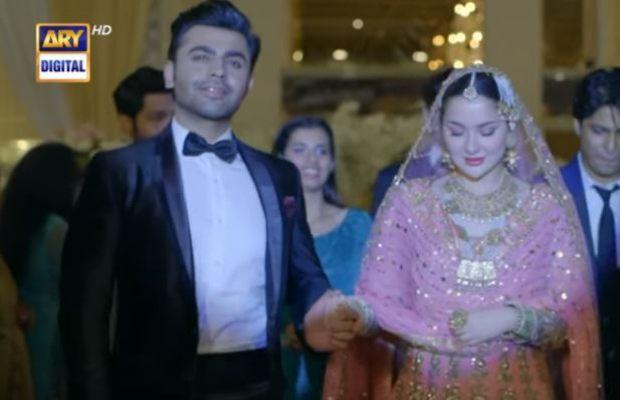 ARY Digital’s drama serial Mere Humsafar is one of the most engaging serials these days with all the desi fairytale romance Tarka. It seems a desi version of Cinderella and her prince charming story but the difference is that there is no happily ever after here. Performances are brilliant. In the previous episode, we have seen that Hamza is supporting Hala by taking a solid stand for her. In this episode too Hamza continues to add colors to Hala’s colorless and boring life.

Hamza is there for Hala, she has got his back now. Dadi who was giving quite selective support to Hala now fully supports her too. She out of nowhere demands Raees to give her his ATM card so she can spend the amount Nafees has given him for Hala’s wedding. Raees surprisingly hands over him the ATM. Dadi announces to hold Hala and Hamza’s Valima next week.

Well, one wonders how come Hala will use the ATM card? Hamza is there for her fulfilling all her demands and adding colors to her colorless life. Hamza and Hala’s Valima’s ceremony is no less than a fairy tale. Both were looking extremely cute together and their chemistry is spectacular. Hamza seems head-to-heel in love with Hala and Hala feels like she is having a beautiful dream.

The way Hamza bows down and helps Hala in buckling up her sandal speaks volumes about his ego-less and caring nature. We are hoping that Hamza is going to be with Hala through every thick and thin. Shahjahan is posing in front of the world as if she has accepted this wedding happily but deep inside she is burning. The scene where Shahjahan is threatening the hell out of Hala the bride on the stage is so horrifying and then the following scene where Hamza is trying to cheer her up looks so cute and refreshing.

Sameen’s character has disappointed us the most. In fact the kind of strong-headed girl she has been shown it seems so out of character for her to cry and whine over Hamza’s wedding. The scene at the valima function where she whines like a small kid that “Mujay eski jaga hona chahiye tha” looks so unreal no one does that. Then following her suicide attempt turns that strong character into a shallow one. Hamza is such a gentleman that he helps Sameen out but then he is back to his Hala. When Hala starts insisting Hamza to divorce her, he starts snubbing and yelling at her. Hamza does not want to leave her, he has married her with all his heart.

tweet
Share on FacebookShare on TwitterShare on PinterestShare on Reddit
Rameeza NasimMarch 31, 2022
the authorRameeza Nasim
Rameeza Nasim, a Paralian, passionate about poetry, drama and fiction. By giving drama critiques I feel like I am endorsing the writer's message to the audiences, I love my job. Being a critic responsibility lies on my shoulders to point out the flaws and shortcomings of the play be it on writer's , performers or director's end . I did my Masters in English Literature and Linguistics .
All posts byRameeza Nasim