Hala still wants to go back to her dad 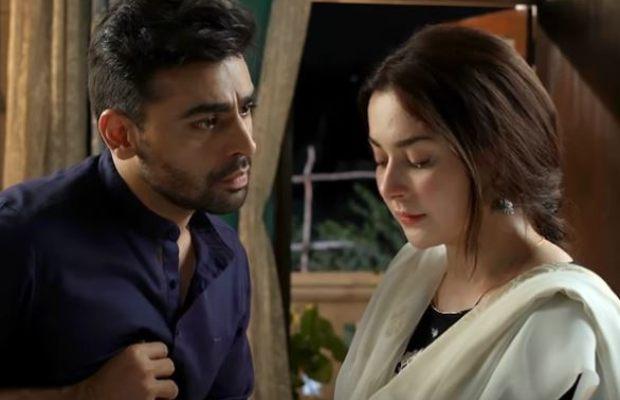 ARY Digital’s drama serial Mere Humsafar is one of the most engaging serials in the running with its fairytale sort of love story. We are rooting for Hala and Hamza, spectacular chemistry by Hania Aamir and Farhan Saeed. In the previous episode, we have seen that Hala has got Hamza’s back. In this episode, we find that Hala is gradually gaining confidence with Hamza’s support.

The episode begins on a very violent note when Hala is insisting Hamza to leave her so that everything will get back to normal in the house. Hamza loses his cool on Hala’s persistent request of divorcing her. He shouts his lungs out at her and he crosses his limit by threatening her that he will pull out her tongue if she ever talked about divorce again. She begs him not to hit her which is so heartbreaking for Hamza and us. It is so unlike a hero.

Later our hero apologizes for his rash behavior to Hala and tells her that she does not have to worry or be afraid of anyone in the house. This sort of assurance has certainly impacted Hala in a good way and she is gradually gaining confidence. The way she refuses her Tayee not to leave the table is clearly the outcome of Hamza’s unconditional support to Hala.

One thing is clear Hala is not yet in love with Hamza she likes him supporting her and caring for her but she is not smitten by him the way Hamza is smitten by Hala. Hala still wants to go back to the UK to her dad, she is pleading with her dad to bring her back. It makes us realize that Hala is quite an ungrateful person who clearly does not acknowledge Hamza’s love and his unconditional support for her. Hala thinks Hamza is too good for her.

Sameen’s character is not making any sense whatever she is doing is like going too much out of her character. She is shown to be a headstrong girl the way she is still whining for Hamza is simply pathetic. Hala goes to her chachoo to apologize but Sameen sees her and starts shouting at her telling her father that she is her enemy. Hamza hears all this. The ending scene is a bit heartbreaking when Hamza in a very romantic mood asks Hala that is he dear to her? Hala spoils his mood by saying that it is not easy she cannot forget all her life that her father has abandoned her. Dear Hala, no one loved and cared for you as Hamza did at least acknowledge!

tweet
Share on FacebookShare on TwitterShare on PinterestShare on Reddit
Rameeza NasimApril 9, 2022
the authorRameeza Nasim
Rameeza Nasim, a Paralian, passionate about poetry, drama and fiction. By giving drama critiques I feel like I am endorsing the writer's message to the audiences, I love my job. Being a critic responsibility lies on my shoulders to point out the flaws and shortcomings of the play be it on writer's , performers or director's end . I did my Masters in English Literature and Linguistics .
All posts byRameeza Nasim