Hamza goes against his mother's order 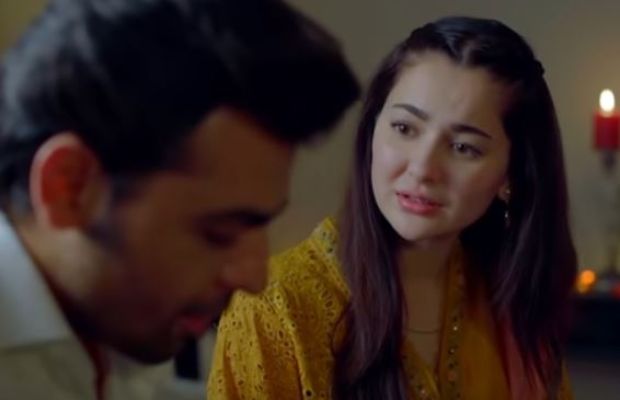 ARY Digital drama serial Mere Humsafar is the one play we wait for the whole year so that we can see Hania Amir and Farhan Saeed’s sizzling onscreen chemistry. In the previous episode, Hamza is giving Hala the required confidence in her. In this episode we see Hamza and Hala taking their relationship to the next level by going on a very short honeymoon trip.

Hamza is super excited to take Hala on a short honeymoon trip his friend has arranged, it is a short stay at his farmhouse. Shah Jahan brutally orders Hamza not to step away from home, she clearly tells him that he can go to the farmhouse if he wants but Hala will not be going with him. The best part is that Hamza persists in his plan as he knows what he is doing is right. He will never allow anyone to exploit his wife’s rights. He takes Hala along with him to the farmhouse.

Shah Jahan’s madness is getting out of proportion, she seems to lose her senses. Shah Jahan creates unnecessary drama over Sameen. She has no right to spoil Sameen’s proposal, her chance to move on. Sameen has almost agreed to her mother’s choice but then Shah Jahan conspires and spoils the whole scene. Shah Jahan is rewarded with a slap by Raees. Well once again that slap is unnecessary it is not needed at all.

Hamza and Hala’s short honeymoon trip is something quite dreamy and Hamza makes sure to make it magical and romantic for Hala. Hala for the very first time confesses that she has fallen in love with Hamza the day he had performed Nikkah with her in the mosque. They both take their relationship to the next level. However their honeymoon trip is just a night long and Hamza has to rush back with her as his father has ordered him to come back. Well one wonders why Hamza has not persisted this time too it is his right to spend some time with his wife.

Shah Jahan’s anger is getting out of control. The slap by her husband has madden her and she is rightly protesting this act but she gets even more mad when she hears that Hamza has fled off with Hala to that farmhouse without her permission. She is continuously calling him but his phone is off. Will Hamza be able to fight for Hala’s rights in front of his mother? Will Shah Jahan keep stooping that low in front of all? We are rooting for Hala and Hamza and we will never want to see any sort of downfall in their relationship.

tweet
Share on FacebookShare on TwitterShare on PinterestShare on Reddit
Rameeza NasimMay 15, 2022
the authorRameeza Nasim
Rameeza Nasim, a Paralian, passionate about poetry, drama and fiction. By giving drama critiques I feel like I am endorsing the writer's message to the audiences, I love my job. Being a critic responsibility lies on my shoulders to point out the flaws and shortcomings of the play be it on writer's , performers or director's end . I did my Masters in English Literature and Linguistics .
All posts byRameeza Nasim