Hala wants to contiue her studies 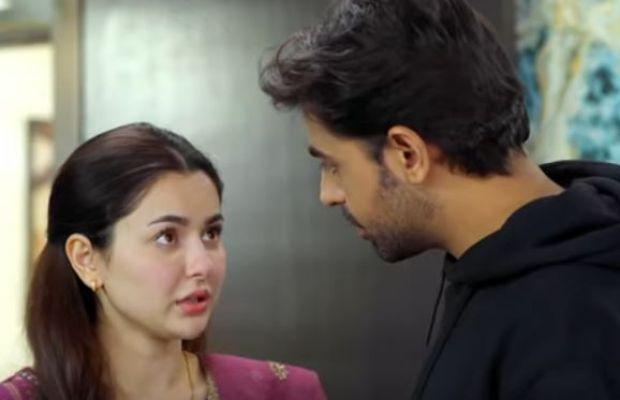 ARY Digital’s drama serial Mere Humsafar is our favorite Prime Time Watch with all the masala and sizzling chemistry of Farhan Saeed and Hania Aamir. Farhan Saeed is quite impressive and charming as Hamza. In the previous episode, we have seen Khurram who has made up his mind to ruin Hala’s happy life. While in the latest, Hamza is materializing all dreams of Hala.

Hala and Hamza’s romantic scenes are what make this serial enjoyable. Hala is now quite a transformed girl, she is no more shy and timid but fully confident or may I say overconfident in a few places. She is now facing Shahjahan and has the courage to reply to her back. She wants to revamp her room setting is okay but going a step ahead and changing the setting of the living room that too goes against her Tayee is a bad move by Hala.

In this episode, we have seen less toxicity in Shahjahan she is more baffled and upset. For the very first time, Hamza has stood up in front of her for his wife. Hamza is quite a calm and balanced person, seems to be the only sane and balanced person in the household. He on her mother’s orders reset the living room back to its old setting but he stops her mother from sabotaging his room’s setting saying that it is his wife’s territory.

Khurram is such a toxic character, he approaches Samreen to get Hala’s number but when Samreen excuses him saying that she is busy he takes it as an insult. He expects others to treat him especially when he is the one who is cheating and abusing his relationship. Hamza’s guest a foreign delegation from his office wants to have a typical desi dinner for which he asks Hala’s help but Tayee intervenes and tries to put up her own menu which Hamza totally rejects the whole idea. Hala saves Hamza from embarrassment by cooking delicious desi dishes in a very short given time.

Hala has already won Hamza’s heart by impressing the guests with her cooking skills. However, Hala is now turning borderline annoying his laptop scene saying that she wants to help Hamza with his office work and then crying about her lack of education looks annoying. It is the fact that Hala has deliberately been deprived of a good education. Hamza is there to fulfill all her dreams he promises that he will support Hala in her studies and furthermore he promises to take her to London to meet her dad. This going to London is eavesdropped on by Rumi and Shahjahan is extremely worried that Hala will take her son away. Overall an enjoyable and satisfying episode.

tweet
Share on FacebookShare on TwitterShare on PinterestShare on Reddit
Rameeza NasimMay 27, 2022
the authorRameeza Nasim
Rameeza Nasim, a Paralian, passionate about poetry, drama and fiction. By giving drama critiques I feel like I am endorsing the writer's message to the audiences, I love my job. Being a critic responsibility lies on my shoulders to point out the flaws and shortcomings of the play be it on writer's , performers or director's end . I did my Masters in English Literature and Linguistics .
All posts byRameeza Nasim