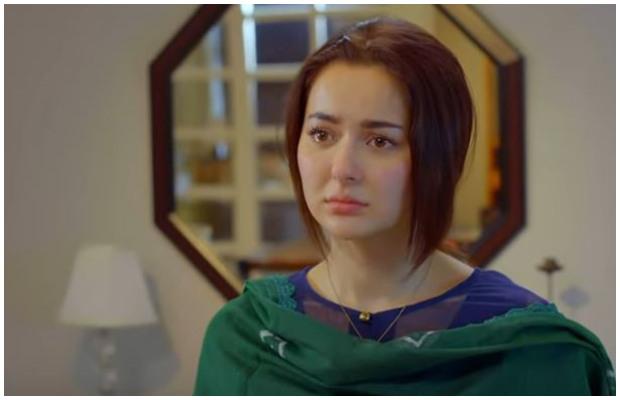 Ary Digital’s drama serial Mere Humsafar is one of the plays for which we wait for the whole week. Performances are super brilliant and it is Farhan Saeed and Hania Asmir’s crackling chemistry which makes this serial even more engaging. In the previous episode, we have seen that Hala gives herself a break. In this episode, it is shown that Hala once again gets trapped in Shah Jahan’s plotting.

Hamza for the very first time stands in front of her mother for Hala. He yells at his mother when she calls Hala names and calls her characterless. He tells her mother that Hala does not need any character certificate as he knows her wife quite well.

Farhan Saeed unarguably is the king of romance onscreen. The way he tells Hala what she is for him looks so romantic. Hamza tells her that he truly believes her. Well, Hala is still the dumbest heroine I have ever seen. She knows well that Khurram’s appearance is definitely going to ruin Hamza’s mood but still she lets Khurram come into the flat. Hala out of her good faith forgives Khurram and she feels really good by doing that but she should know that Hamza will be back anytime and he will not going to like his presence.

Rumi is going too fast. She is the one who will lead towards Shahjahan’s disaster. Rumi has secretly married her boyfriend. Well, how come she manages to get out of the college and go to his place for Nikkah? Shahjahan on the other hand is still pursuing her best friend’s son’s proposal for Rumi. Shahjahan has no idea that Rumi has ruined her plans and she has already been nikkahfied to her boyfriend. Well, it is so satisfying to see Shahkahan leading towards a misery that she truly deserves.

Shahjahan being so vile goes to Hala’s place and tells her that Hamza is just looking after her because she is expecting his child otherwise he would have divorced her. She further says that he is waiting for her delivery after that he is going to divorce her. Hala is so naive that she buys what her vile Tayee is telling her knowing her nature she should have shown some faith in Hamza. It looks so stupid that she starts crying that Hamza will take her baby. Why does she is not believing Hamza? Hamza literally does not deserves such mistrust. Will Hala go with Hamza to his house or will she go with her dad to London? I think for her safe delivery she should avoid Tayee’s toxic drama and she should leave with her dad to London giving herself and Hamza a break.

tweet
Share on FacebookShare on TwitterShare on PinterestShare on Reddit
Rameeza NasimAugust 25, 2022
the authorRameeza Nasim
Rameeza Nasim, a Paralian, passionate about poetry, drama and fiction. By giving drama critiques I feel like I am endorsing the writer's message to the audiences, I love my job. Being a critic responsibility lies on my shoulders to point out the flaws and shortcomings of the play be it on writer's , performers or director's end . I did my Masters in English Literature and Linguistics .
All posts byRameeza Nasim