In this episode and Hamza and Hala's characters are not making any sense at all. Confusing Narrative! 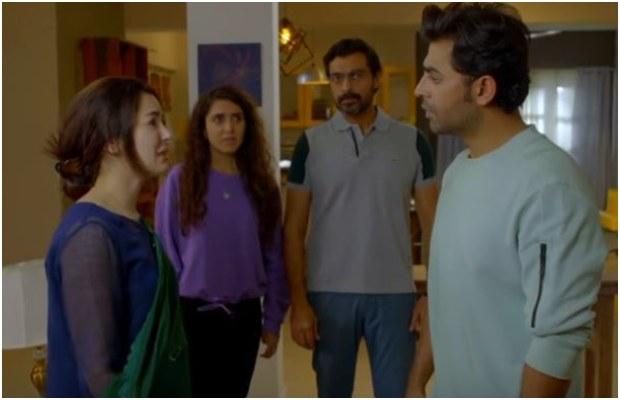 Mere Humsafar Episode-36 Review – Mere Humsafar drama serial running on ARY Digital is one engaging Weekend Watch based on Hania Aamir and Farhan Saeed’s crackling chemistry. It would not be wrong that it is Hala and Hamza’s romance scenes that are carrying the whole play. In this episode, we have not gotten a chance to see any romantic scene between Hala and Hamza. Hamza starts doubting Hala because of Hala’s own dumbness. In the previous episode, we have seen that Hala is so dumb that she once again falls into Shahjahan’s plotting.

Hala turns out to be the dumbest heroine ever she clearly knows Tayee’s nature but still, she gets trapped in her plotting. Hamza says that he truly believes Hala still Hala has shown no faith in Hamza, she starts believing that he is going to leave her after the delivery and also going to take away her baby. Hala creates a lot of panics and she is not ready to believe Hamza.

Hamza tries his best to convince Hala that he will not leave her but Hala being the dumbest girl ever said the rudest thing, she says that before he thinks to leave her, she is going to leave him. Hamza is shocked and broken to hear this from Hala. He now starts doubting Hala’s intentions. He asks her if that is the only reason for leaving him well dude your mother is after Hala and her baby’s life isn’t it a solid reason?

Shahjahan on the other hand is more than happy to ruin Hala’s happiness now she is all set to fix Rumi’s engagement with her best friend’s son. Shahjahan has not in her wildest dreams ever thought that her daughter has secretly married her boyfriend. We as an audience feel extremely satisfied to see the downfall of Shahjahan and it seems that Rumi is going to bring that disaster for her.

Hamza has stooped so low he has turned out to be a huge disappointment for us. Hamza actually starts doubting Hala and we can equally blame Hala for this her stupidity and dumbness have led Hamza to think in that way. Hamza actually goes to Khurram’s place and he has been so shameless that he actually offers to marry Hala. Khurram is trying his best to clear this misunderstanding but Hamza is in no mood to listen and believe him. It is so heartbreaking to see Hamza falling from grace. Will this doubt will make Hamza fall out of love? Well to be honest this whole episode and Hamza and Hala’s characters are not making any sense at all. Confusing Narrative!

tweet
Share on FacebookShare on TwitterShare on PinterestShare on Reddit
Rameeza NasimSeptember 2, 2022
the authorRameeza Nasim
Rameeza Nasim, a Paralian, passionate about poetry, drama and fiction. By giving drama critiques I feel like I am endorsing the writer's message to the audiences, I love my job. Being a critic responsibility lies on my shoulders to point out the flaws and shortcomings of the play be it on writer's , performers or director's end . I did my Masters in English Literature and Linguistics .
All posts byRameeza Nasim