Hala continues to endure all the cruelty 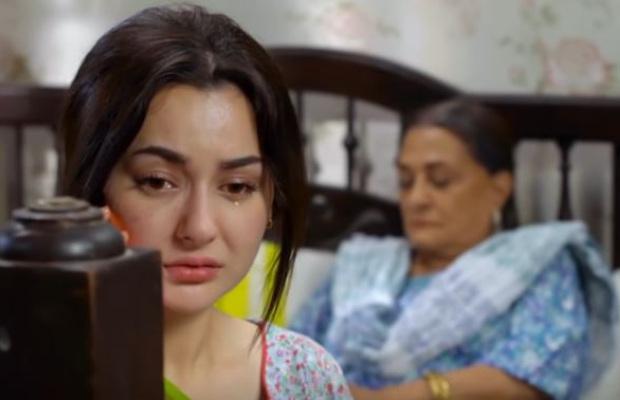 Mere Humsafar the ARY Digital’s drama serial is quite a regressive watch that needs a strong heart to watch. Hania Aamir has done a good job but few places it seems that her performance is short or she has overdone it. In the previous episode, we have seen Dadi pairing Hala with Hamza. In this latest episode, Hala’s heart is broken by none other than her own father.0p

Hala is getting bullied by Rumi. Rumi has taken that proposal thing to her nerves and on top of that Sameen is making fun of Rumi, teasing her making her mad, and then she exerts all his anger on Hala snubbing her not to think of marrying his brother. Poor Hala has no place for refuge. Tayee Ammi is also physically torturing Hala. Why she is silently enduring this?

This is the 6th Episode and we still have not seen Farhan Saeed in this play. We are anxiously waiting for his screen presence, he will add some colors to this depressing story and also in Hala’s life being Cinderella’s prince charming, however, there is still no sign of him. Raees has somehow convinced her mother not to think about Hala and Hamza’s marriage as Hamza is not happy with this idea which in reality is not the case. Surprisingly Dadi seems to get convinced.

Raees and Shahjahan are thinking to send Hala back to England and they talked about it with Dadi Hala overhears it and she is super happy to know that she is going to her daddy. Little does she know that her own father is not ready to take her as his wife and children are not ready to accept her. He has already abandoned his daughter and the most hurting part is when her father tells her that she is not a studious girl and starts blaming her for things that she hasn’t done. Hala is heartbroken after talking with his father.

Hala is a nincompoop the guy she is with is clearly passing time with her and he has proved that at several places but still she has clung with him. The most stupid thing is that she has started telling people that she likes someone including her friend and Sameen. Hala has no idea that her friend is engaged with that guy. The guy is a big-time opportunist when Hala shares with her about going with her father he tells her to call him to England too and he is super excited to go there. However, when Hala shares with him her father’s views he starts losing his cool. He deserves to be dumped, we are waiting for Hamza’s arrival into the scene to bring colors to Hala’s life.

tweet
Share on FacebookShare on TwitterShare on PinterestShare on Reddit
Rameeza NasimFebruary 4, 2022
the authorRameeza Nasim
Rameeza Nasim, a Paralian, passionate about poetry, drama and fiction. By giving drama critiques I feel like I am endorsing the writer's message to the audiences, I love my job. Being a critic responsibility lies on my shoulders to point out the flaws and shortcomings of the play be it on writer's , performers or director's end . I did my Masters in English Literature and Linguistics .
All posts byRameeza Nasim