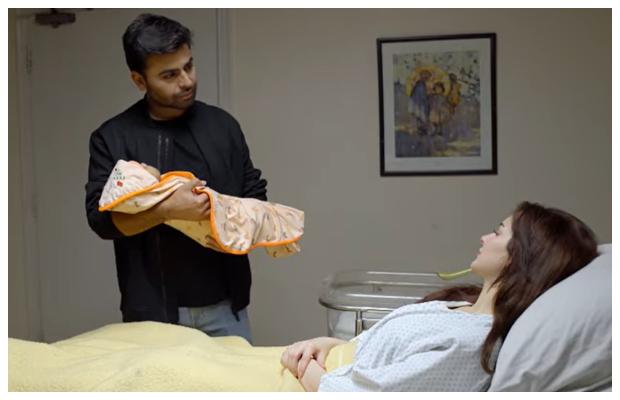 ARY Digital’s drama serial Mere Humsafar is finally moving towards its conclusion. This is its second last episode. Performances are as usual brilliant. In the previous episode, we have seen that Hala plays a vital role in solving Rumi’s issue. In this episode, it is shown that Hala and Hamza are blessed with a baby girl and they both are reunited.

Rumi’s inlaws are too good to be true. I mean are they for real? Waqas parents seem to be okay with their son’s choice which looks quite unreal and not just that they really like Rumi. They are asking for an early marriage date when Shahjahan makes her entry and she starts misbehaving with them. Well despite all such misbehavior Waqas’s father says that they won’t leave their women like that now it is an inevitable relationship that sounds too absurd and unreal.

Hamza tries to control his mother, he tells her not to do any such thing. However, Shahjahan is not going any slow. Hamza comes to meet Hala he is in miserable condition. He thanked Hala for helping him in solving Rumi’s problem. Moreover, he confesses to Hala that he has gone to Khurram and all which ends in Hala’s breakdown and then she has taken to the hospital.

Hala and Hamza have been blessed with a cute baby girl and this baby brings Hala and Hamza close again. They are reunited with their child. Shahjahan bluntly tells Hamza that she is not ready to welcome his daughter. Shah Jahan is busy sabotaging Rumi and Waqas’s relationship. She tells Waqas that Rumi wants a divorce. Hala finally agrees to go back with Hamza to his house. Despite Shahjahan’s disapproval, Hamza brings Hala and his daughter home. Shahjahan creates a lot of fuss but Hamza stands for his wife and daughter.

Shah Jahan is making hues and crying on Hala and her baby daughter’s arrival when Rumi comes and tells that how her mother tries to ruin her relationship with Waqas. Everyone is in a state of shock. Later Rumi confesses that whatever Shahjahan accuses Hala of doing with Sameen was actually done by her and she begs forgiveness for it too. Hala is validated in front of all and so is Sameen. It is a breakdown moment for Raees and he is about to divorce Shahjahan but Jalees intervenes. Well, I don’t agree with him putting all blame on the ill bringing of Rumi on Shahjahan. He is equally responsible for making Hala’s life hell. Well, let’s see how things will going to conclude in the ending episode.

tweet
Share on FacebookShare on TwitterShare on PinterestShare on Reddit
Rameeza NasimSeptember 23, 2022
the authorRameeza Nasim
Rameeza Nasim, a Paralian, passionate about poetry, drama and fiction. By giving drama critiques I feel like I am endorsing the writer's message to the audiences, I love my job. Being a critic responsibility lies on my shoulders to point out the flaws and shortcomings of the play be it on writer's , performers or director's end . I did my Masters in English Literature and Linguistics .
All posts byRameeza Nasim