Komal's sense of intricate and complex planning has made her life miserable for sure! 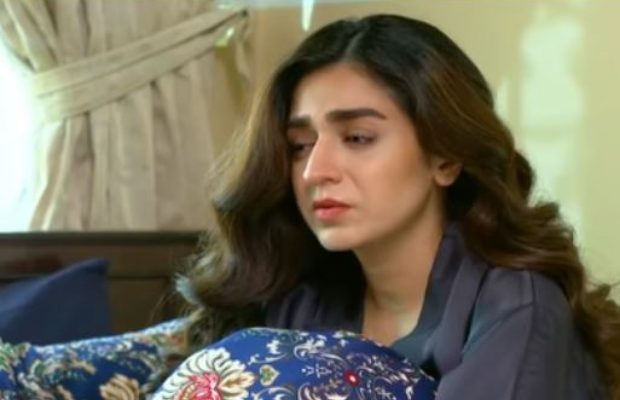 Geo Entertainment’s multicast soap drama Mohabbat Chor Di Maine is 35 episodes down now. Previously we saw how Omar (Mohsin Abbas Haider) is torn between her two wives and finds it difficult to keep balance in his life. The story continues with the same.

Komal’s (Hajra Yamin) sense of intricate and complex planning has made her life miserable for sure and in ignorance, she is not letting her life become easy for anyone. She cant tolerate Sehar’s (Mariyam Nafees) mother staying at her home and after her annoying friends visit her, she is taking out all the rage on Omar.

The way Komal has married her sister law to her brother, it’s creating a new mess in Zaini’s (Rushna Khan) life. Komal visits her father’s home and does not let go of a single chance to degrade Zaini. It’s pretty clear that she has severe complexity issues. This time she is targeting Zaini with the offer to renovate her father’s home.

Seher’s mother tries to teach Komal a lesson and reminds her that Omar has married her daughter and has a son. Komal is furious as she finds they had been cooking and eating in the kitchen and having Omar’s guests later is an excuse she finds to humiliate them all.

Omar snubs Komal back when she complaints about the day’s happening. Seher demands her right at home. Omar is persistent that Komal should apologize to Seher’s mother for insulting her. As Komal refuses to do so, Omar takes Seher and her mother to dine out.

Komal is recalling the time when she fought Omar over discovering his second marriage. And when they return, Komal is furious and insults them again. It’s more than difficult for her to accept that she is sharing her husband with another woman.

Seher’s taking advantage of the situation demands a separate house, for Omar things are getting unbearable. Komal is now is taking the argument to another level, she threatens Omar that she will break his sister’s house as well if she is unable to protect her home.

Komal’s father suffers a heart attack and it seems like a new battlefield is opening for Zaini now. Komal on the other hand rushes to her cousin and talks about her father’s health. And this time she blames Zaini and her set mother for not taking care of her father.

Komal’s father’s death adds more to her insecurity and the episode moves on with flashbacks of his memories.

Omar comes to pick Komal but finds her emerged in looking at old albums along with her brother and cousin but the sheer neglect has hit Omar hard and he leaves instantly. Though Zaini tries to push Komal that her daughter will be missing her but Komal seems least interested.

There is some bad news for Seher and her mother as her blackmailing cousin has reached Karachi and is searching for their home.

Seher has hidden her mother’s phone after receiving blackmailing calls and her bad that the maid has found it which reports about it to Komal. Yet she will be utilizing this against Seher when the right time comes. And Omar the other night catches the call as Seher tries to cover it by saying it’s a wrong number. Omar wants to report it to the police if someone is harassing her wife and keeps on asking if something is wrong.

Seher wants to share about her blackmailing cousin with Zaini but her mother forbids doing so. It looks like this past knot will bring trouble for Seher’s marriage with Omar and Komal will take advantage of that.

It’s a new turn in the story that somehow Seher’s blackmailing cousin has found a job as their new driver and tells her name Sharfo to Omar and it’s going to bring new masala to the story plot.

Seher gets a shock of her life when she goes to pick Omar’s daughter from school and find’s Sharfo as the new driver. After returning home Seher shares the update with her mother, both feel hopeless and helpless.

It’s not just Komal, Seher also has some past ties that are not letting her life peacefully. It seems like it’s Komal who has hired a new driver. Sharfo is now demanding to take away Seher, his new threat of blackmailing!