Komal has found the genuine reason to kick Sehar and her mother out of her home. 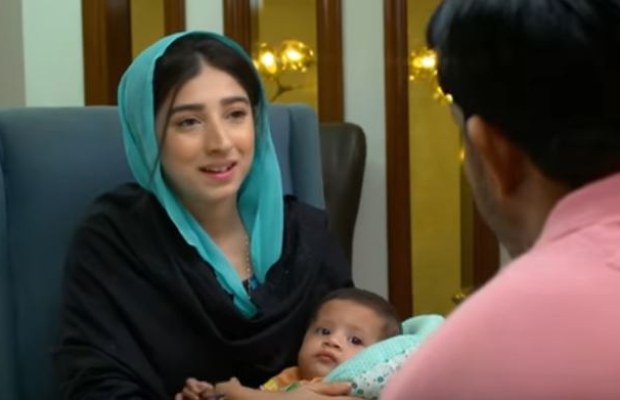 The story unfolds a new tussle among the characters of  Mohabbat Chor Di Maine, the soap airing at Geo Entertainment.

Sehar (Mariyam Nafees) is devastated to see the new driver and more is added to her misery as she can not tell Omar (Mohsin Abbas Haider) about the blackmailer Sharfo. As Sharfo tries to take away Sehar but is shocked to find that Omar knows about the car’s location as he calls to guide him to the address, the cunning driver has no choice but to oblige for the time being. On the other hand, Sehar’s mother is persistent in not telling anything to Omar.

There is another test for Sehar who gets scolded by Omar after Komal has complained about driver Sarfaraz aka Sharfo who got inside the house. The housemaid keeps adding fuel to the fire from time to time by backbiting against Sehar.

Komal takes it as a golden chance and wants to kick Sehar’s mother of the home, this time Omar takes her side. Omar (Mohsin Abbas Haider) who is torn between her two wives cant keep balance in his life and is not just to both his wives.

In the meantime, Zaini by chance sees Sehar’s mother giving money to Sharfo who seems to be threatening her. She comes to know that Sehar is hiding something from her and maybe she might be able to help Sehar. The dragged story is surely taking a toll on viewers.

The character of Omar is proving to be quite annoying who keeps taking side with Komal even after knowing her nature and what she has done with her. Sehar finally gains some courage and demands for a separate house or to make a choice between her and Komal’s house. She doesn’t want to leave her mother alone but it doesn’t bother Omar.

The driver Sharfo from time to time keeps threatening Sehar’s mother, who is scared to death if their reality is disclosed. The tragedy is about to happen as she goes to Komal’s bedroom and searches for valuables. She has stolen Komal’s gold jewelry to give to Sharfo which later she claims that the jewelry was Sehar’s.

Maid has sensed something is wrong and shares her doubts with Komal. Their talk has left recalling everything she observed about the driver and Seher and her mother. She asks the maid to let the driver go outside with some excuse and search the driver’s room before Omar gets back home. They have found the stolen jewelry and are ready to confront the driver.

As Komal and Omar confront Sharfo he directs the blame towards Seher and her mother telling them that they are professional thieves and they were planning to run with all the money but he arrived and also plays an audio recording of Sehar’s mother.

Omar has lost his mind and wants to kick Seher and her mother out of the home. Komal later insults them both and asks them to leave the home as soon as possible. Both mother and daughter are pleading but it’s useless in front of Komal. Omar has gone to Zaini’s home also Komal’s parents’ house to share how Sehar has betrayed him.

Omar tries to console himself by taking refuge behind Komal however, Zaini on the other hand is not convinced with the development and she tries to find out clues to sort our things for Sehar.

Komal takes advantage of the situation and bails Sarfaraz out of the jail so that the issue doesn’t reach court. But later finds out the Sehar and her mother haven’t reached the village yet.

Omar is feeling guilty for behaving badly with Sehar without looking after the truth however, Komal gets furious after finding Omar’s intention to go and look out for Sehar and her mother.

It comes as a shocker for Omar and Komal as he gets a notice from Sehar who has filed a case against him over false allegations. Well, we wonder who is behind that and supporting Sehar who was kicked out of Komal’s house empty-handed. The address on the notice’s envelope bears Karachi’s address which means Sehar hasn’t left for the village.

It turns out that it is Hazim, Komal’s cousin, and past love interest who has given shelter to Sehar and her mother in Karachi and helped her pursue a legal battle. On the other hand, Komal is doubting Omar for creating all this drama.

Upon reaching the lawyer’s office Omar comforts Sehar and asks who is helping her and accuses her of trapping another rich man. The story takes another dramatic turn as police arrests Sarfaraz once again and also the maid and the news has irked Komal who is persistent that Omar should divorce Sehar and close the chapter once and for all.

Reality unfolds in front of Omar as Sehar’s lawyer reveals that Sarfaraz has admitted to harassing Sehar and Komal knew the whole thing but still bailed him out and did not let him reach court.

Zaini is at Hazim’s home congratulating Sehar for being proven innocent and in the meanwhile, Komal arrives and finds that it was Hazim who had been supporting Sehar. Komal feels as she is once again betrayed by her first love.

Everyone supporting Sehar wants her to go back to Omar’s home but she is resolute she won’t go back as that house belongs to Komal.

While Omar once again feels shattered after falling prey to Komal’s schemes and this time it’s Hazim who tries to instill some piece of advice to him and wants him to take Sehar with her. Well, the blame game continues and Omar has no choice but to swing like a pendulum between his two wives!