Raima meets her Mamu and says she will buy their house. 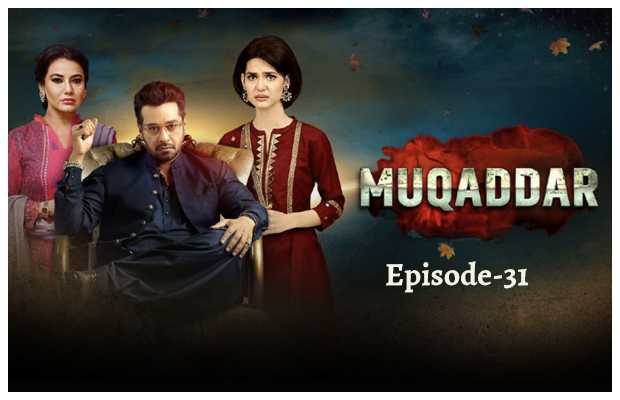 GEO Entertainment’s drama serial Muqaddar after 32 episodes seems to be a bit dragged. The story of the play is getting wrong at so many levels. Raima has started developing feelings for the one who has kidnapped her, forcefully married her, it is so disturbing to see a headstrong girl like Raima fall in love with Sardar Saif. Faysal Qureshi’s portrayal as Sardar Saif is so powerful and also Madiha Imam’s performance is brilliant but it is her character which is disappointing us.

Sardar Saif is embarrassed for whatever allegation his first wife tries to put on poor Raima and she tries to stain her character. Well, we were expecting a very violent and strong reaction from Sardar Saif but he did not do much to his first wife other than yelling at her. Abeera’s mother is not talking with her and it is disturbing Abeerah.

Haris has realized that he cannot escape from Raima’s memories, he feels that it is now difficult to live in the same city and the same house which has so many memories of him and Raima so he has decided to leave the country. He has applied for immigration which is approved so now he wants to settle down in London. He is also taking his father with him. Despite his father’s refusal he is persistent to take him as he is going to sell this house.

Raima’s Mamu wants to meet Raima, he goes to Sardar Saif’s office and requests him that he wants to meet her niece. Sardar Saif very nicely treats him but he says that he will ask Raima if she wants to meet him he will have no issue but he cannot bear to see her wife get insulted. Raima meets her Mamu and there he imparts the news of him leaving the country and settling abroad and moreover he tells her that they are selling this house on which Raima says that she will buy this house. Raima still has feelings for Haris.

tweet
Share on FacebookShare on TwitterShare on PinterestShare on Reddit
Rameeza NasimSeptember 16, 2020
the authorRameeza Nasim
Rameeza Nasim, a Paralian, passionate about poetry, drama and fiction. By giving drama critiques I feel like I am endorsing the writer's message to the audiences, I love my job. Being a critic responsibility lies on my shoulders to point out the flaws and shortcomings of the play be it on writer's , performers or director's end . I did my Masters in English Literature and Linguistics .
All posts byRameeza Nasim