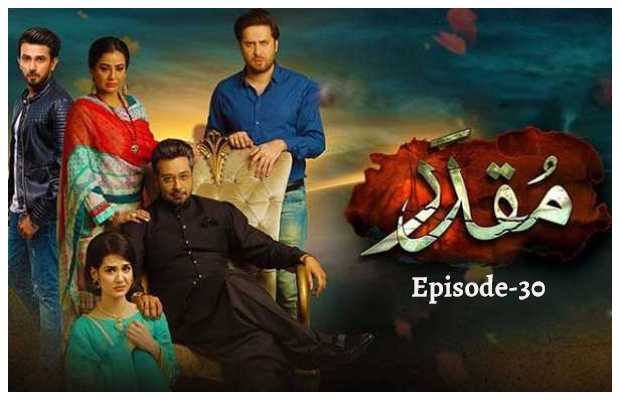 Airing at GEO Entertainment, Muqaddar is a play based on the Stockholm Syndrome theme, although we do not like to see a headstrong girl like Raima falling for Sardar Saif, a feudal who has forcefully married her. Well, she has not really fallen in love with him but she has certainly developed some feelings of affiliation for him and she starts possessing him as his wife. Faisal Qureshi and Madiha Imam’s performances were simply brilliant.

Saad is trying to protect Raima in best possible way from the tactics of his Tayee. He is shocked to know that she actually wants to kill Raima! His Tayee Ammi’s image has shattered in front of him. He is telling Raima that she is very bravely confronting Tayee Sarkar. Well on the other hand Sardar Saif’s wife wants to defame Raima in front of Sardar Saif’s eyes and she is dead sure that Saad has some feelings for Raima.

Sardar Saif’s wife returns home early so that she can catch Saad with Raima and then she can easily get evidence to defame her in front of Sardar Saif but all her efforts get in vain when she is going towards Raima’s room and Saad calls her downstairs. Saad is fully aware of what is going in his Tayee’s head, he thanked God that his Tayee has not caught him talking with Raima in the kitchen.

Sardar Saif’s wife tries to offer Raima a hefty amount of money so that she can leave Sardar Saif but she clearly tells her that her loyalty has no price. Saad is hearing all this. Sardar Saif returns home and surprises Raima. He goes straight to Raima’s room before meeting anyone else. Abeerah is very sad about knowing that her father has ignored her for Raima.

Sardar Saif is sitting in the lounge when his first wife tries to act very smartly, she starts vilifying Raima’s character in front of Sardar Saif by trying to scandalize her with Saad. When Sardar Saif calls her, she says that she does not have to say anything in her defense, Abeerah will prove her innocence as she cannot let her fiance defame like that. Abeerah reacts positively to it, she tells her father that her mother is lying, she has not done anything with Saad in fact she was down with fever when Saad entered into her room that is why he got worried. Now, who is going to save Sardar Saif’s wife from Sardar Saif’s wrath?

tweet
Share on FacebookShare on TwitterShare on PinterestShare on Reddit
Rameeza NasimSeptember 9, 2020
the authorRameeza Nasim
Rameeza Nasim, a Paralian, passionate about poetry, drama and fiction. By giving drama critiques I feel like I am endorsing the writer's message to the audiences, I love my job. Being a critic responsibility lies on my shoulders to point out the flaws and shortcomings of the play be it on writer's , performers or director's end . I did my Masters in English Literature and Linguistics .
All posts byRameeza Nasim