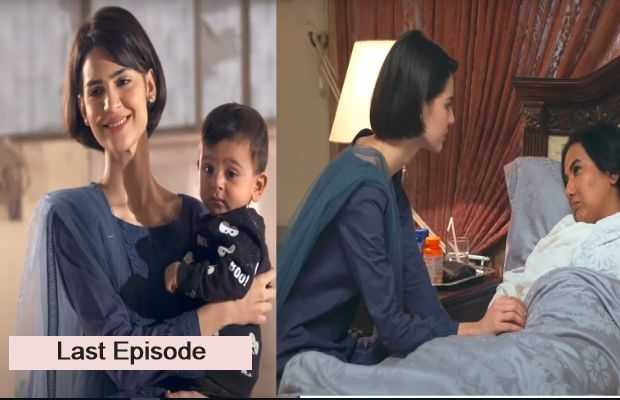 Geo Entertainment drama serial Muqaddar finally came to its end. The ending is very predictable, the play ends on a positive note Raima whole heartily forgives Farkhanda Begum despite knowing that she is the one behind the attack. Abeerah and Raima become very much attached and Abeerah grows very fond of Raima and her baby brother. Performances are simply brilliant, Madiha Imam and Sabeena Farooq have given amazing performances in this play. I would like to appreciate Haroon Shahid’s performance too in this play it is so impressive. Although with so many problematic issues the play ended on a positive note.

Raima is taking the best care of Farkhanda Begum despite knowing that she is the one behind Sardar Saif’s murder but still she has whole heartily forgiven her. It is said that to err is human and to forgive is divine. The message is that we all need to embrace divinity and we need to forgive others. Abeerah being Farkhanda’s daughter feels hard to forgive her own mother.

Abeerah tells her Mamu to take away her mother with him as she cannot take care of her anymore. It is Raima who comes forward and says that she will take care of Farkhanda Apa despite knowing everything she shows her compassion towards her so much so that even Farkhanda’s brother seems touched by it. He prays for Raima’s happiness and well being and on his way back home he met a deadly accident and dies. In a way, we have seen that divine justice has been served. However, the mastermind behind the murder is also suffering a lot.

Raima’s Mamu names his house after Raima and he hands the house papers to her. Raima should have not accepted this gift, it is not just her but Haris’s house too how can she take his share? She must have realized that her Mamu is not rich enough to have so much property she should have taken care of Haris and should refuse to take the house as a gift or if she wants the house she should have paid for Haris’s share. Raima in front of her Mamu accepts that she has not forgiven Sardar Saif in his life when he used to beg forgiveness from her. Well, Makers of the play has very artfully glorified Sardar Saif as a hero.

Sardar Saif’s lawyer reads his Will, in which he has given a major share to Saad because Saad’s Dada has not given Saad’s father any share. The Lawyer says that Sardar Saif said that he wants to correct this by giving Saad his due share. Furthermore, the lawyer says that Sardar Saif wants to name his child after his brother, Saad’s father’s name. One more thing I don’t like about is when Abeerah says that can she give her property share to her brother? Raima should have refused to accept this, she should have told her that no it is her own share, it is her right no one should have it but no she smiles on it. Too disturbing, in rural areas naming sisters property after brother is so common but it should be condemned. Here Raima looks like an anti-heroine. Saad and Abeerah got married, and Raima gives birth to a cute baby boy. She starts her social work. Well with so many disturbing points the play ended on a positive note.

tweet
Share on FacebookShare on TwitterShare on PinterestShare on Reddit
Rameeza NasimNovember 3, 2020
the authorRameeza Nasim
Rameeza Nasim, a Paralian, passionate about poetry, drama and fiction. By giving drama critiques I feel like I am endorsing the writer's message to the audiences, I love my job. Being a critic responsibility lies on my shoulders to point out the flaws and shortcomings of the play be it on writer's , performers or director's end . I did my Masters in English Literature and Linguistics .
All posts byRameeza Nasim