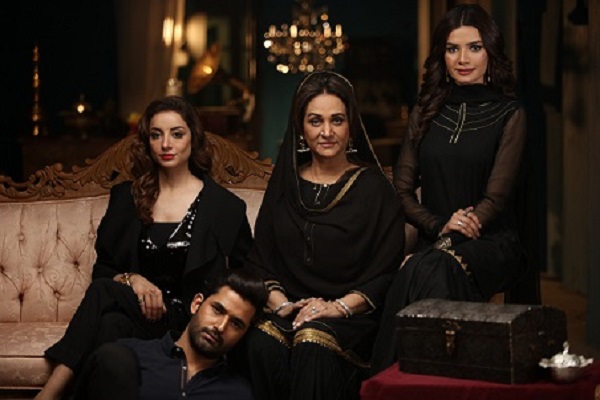 Naulakha, a production of the 7th Sky Entertainment, goes on air every Tuesday at 8p.m. on TV One. The drama is written by none other than Umera Ahmed; what makes Naulakha unique is that the drama takes its inspiration from the Mughal Dynasty’s ‘naulakha’. Featuring stellar cast of Bushra Ansari, Behroz Sabzwari, Sarwat Gillani, Mirza Zain Baig, Kiran Haq, Arjumand Hussain and Sana Askari, this is the new drama attraction you had been waiting for this season.

Naulakha starts strong. It reveals all the major characters, telling us from the get go, that the story is basically about one single family of brothers, sisters and their children. Sarwat Gillani named Tehreem, Mirza Zain Baig named Zain Ali, Sana Askari named Qurat-ul-ain and Kiran Haq called Shafaq are first cousins. There exists a love triangle between Tehreem, Zain and Shafaq. Qurat-ul-ain, on the other hand is engaged to be married to Tehreem’s elder brother. The elders of the drama are also going through rivalry that apparently exists from olden times.

What is interesting tough is that behind the same old story of unrequited love and jealousy, there also lies home politics about the acquisition of the infamous ‘naulakha haar’. The sister, Tehreem’s mother exudes dislike towards Shafaq and her mother because she feels that she was cheated out of her right to the ‘haar’ and all the property attached to it. The eldest brother, i.e. Qurat-ul-ain’s father thinks likewise, while Zain Ali’s father seems to be the only non-political person of the family, probably because he is the current owner of the naulakha. In simple words, everyone wants to own the naulakha or have their kids own it in order to attain the power attached to it.

Naulakha is great because the story line is moving pretty swiftly. In this episode, we discover that Shafaq admits her love for Zain Ali in front of Tehreem, who is devastated as she too is in love with him and wishes to marry him. Shafaq also reveals that she and Zain have been engaged since their grandfather betrothed them during childhood. Surprisingly Zain also finds it out just lately through his father and refuses to sacrifice his love for Tehreem.

Tehreem on the other hand, as she is best friends with Shafaq rejects Zain’s proposal as she cannot bear to break Shafaq’s heart. The adults get involved too when Zain Ali begs his ‘bari ami’, Shafaq’s mother to not force his marriage to Shafaq. When Shafaq hears of this, she gets broken.

Will Zain be able to get out of the arranged bondage or will he be forced to withdraw his rights of property in order to make Tehreem his? Will Shafaq and Tehreem’s friendship be tarnished forever? Who will gain the Naulakha? We will only find out in the next episode on the same time next week. So be sure to tune in to TV One to discover how this saga of love, jealousy and rivalry progresses.