Will Parizaad open his mouth in front of the Police or is he going to save his master? 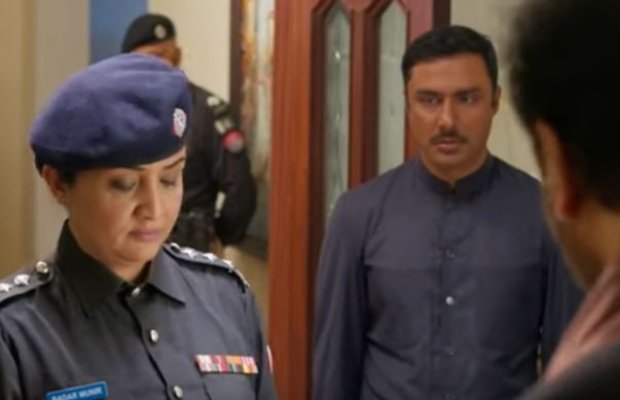 Parizaad drama serial at HUM TV is our favorite Prime Time Watch. The best part of the play is that story is fast-paced and we love the journey of Parizaad and his character evolution by meeting all the characters. In the previous episode, it was shown that Police were searching for Parizaad and in the lastest, the police finally captured Parizaad from Behroze Karim’s house.

Parizaad in the middle of the night risks his life to go and meet Bubbly’s parents. Parizaad luckily dodges Police and goes to Bubbly’s parent’s house to convince them to accept Bubbly who is now Dilawar. The scene where both the parents come to Guru’s place and eventually they end up accepting Bubbly as Dilawar is quite emotional but we are more interested in Parizaad’s track.

Inspector Badar Munir is too devoted to the case, she finds out the state agents who let that girl Sara rent the place. Through those men, she gets hold of that girl Sara and eventually, she arrests her. Poor girl is hiding to save herself from Behroze Karim’s goons. Feroze is extremely mad at his goons for not getting the girl before the Police. Sara finally records her statement against Behroze Karim.

Inspector Badar Munir shares the recording of Sara’s statement to her superior, well we were expecting that he will snub her once again but to our surprise, he tells Badar Munir to be careful and says he will get warrant issues for Behroze Karim’s arrest. He says that he will talk to Home Minister when we all know that Behroze is so influential that more than half of the Parliament is on his side then how come anyone let the Police officer issues arrest warrants of Behroze Karim so conveniently, it is hard to believe as such big fish like Behroze Karim is impossible to catch.

Police raids at Behroze Karim’s office and Inspector Badar Munir marches into the house with arrest warrants in her hands. Despite Feroze’s fierce resistance, she does not stop and moreover, she dares to slap on his face. Right at this sensitive moment Parizaad also enters into the scene. Well why it is necessary for Parizaad to show up in such a crucial moment? Why can’t he hide and save himself for being evidence against Behroze? Badar Munir faces Behroze and shows him his warrant on which Behroze shows his pre-bail papers Badar Munir takes Parizaad with her. Will Parizaad open his mouth in front of the Police or is he going to save his master?

tweet
Share on FacebookShare on TwitterShare on PinterestShare on Reddit
Rameeza NasimOctober 27, 2021
the authorRameeza Nasim
Rameeza Nasim, a Paralian, passionate about poetry, drama and fiction. By giving drama critiques I feel like I am endorsing the writer's message to the audiences, I love my job. Being a critic responsibility lies on my shoulders to point out the flaws and shortcomings of the play be it on writer's , performers or director's end . I did my Masters in English Literature and Linguistics .
All posts byRameeza Nasim