Well, the end of the play is certainly not what is written in the novel. 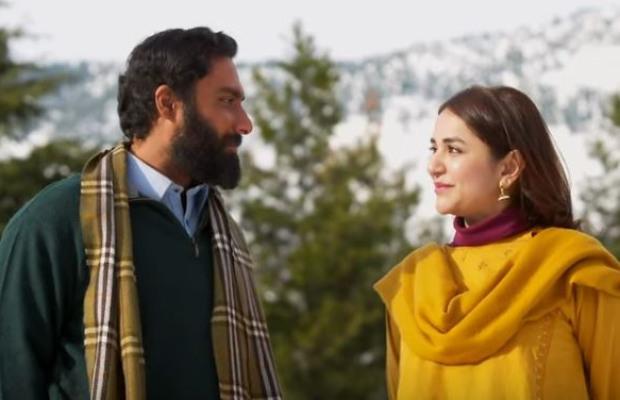 Parizaad the magnum opus after premiering in the leading cinemas all across Pakistan this weekend eventually airs its finale at Hum TV! I have successfully avoided all the spoilers. Airing the TV dramas finale in cinemas or not is a separate debate. Let’s leave this debate and celebrates the beautiful conclusion of this masterpiece. Kudos to the entire team of Parizaad for bringing up such a classy serial with excellent writing by Hashim Nadeem and equally brilliant execution by Shehzaad Kashmiri. Thank God it’s a happy end!

The finale of this masterpiece Parizaad comes into two parts. The first part is the recap of Parizaad’s whole life journey right from his birth to his journey to Kashmir. The recap editing is done with such mastery that we do not feel bored for a single moment in fact we are in awe of such beautiful storytelling and excellent writing powered by Ahmed Ali Akbar’s phenomenal acting he has taken the acting craft to the next level.

Well, the end of the play is certainly not what is written in the novel. In the novel, Parizaad has died and we all are fearing for such a tragic end for the serial as well. However, this ending is a happier one where Parizaad not only survives but gets his love of life. Yes, the play ends with a happy union of Ainee and Parizaad.

Parizaad is so cruel that he is deliberately abandoning Ainee just because of his complexes. Ainee has become a victim of Parizaad’s inferiority complexes. Parizaad’s students have done really well in the board exams and he is really determined to devote his life to the welfare of children and their education in that village. Ainee comes for news coverage of Parizaad’s school and there Parizaad encounters Sharjeel. We are hating Parizaad for stopping Sharjeel not to disclosing his identity to Ainee.

Ainee immediately recognizes Parizaad when she hears his voice. She goes after him and senses his face once again with her touch and this is one of the most beautiful intimate scenes! Parizaad is exposed to her! She asks why he has left everything and why he has not fulfilled his promise? He says that he is not the one who is worthy of getting his love. Ainee said then at least he should have given their friendship a chance. Ainee offers Parizaad to help him in achieving his dream of working for children in the village. She says that she will be the best assistant he could ever have. The play ends on a beautiful note with a small piece of poetry which is a tribute to Munir Niazi. Parizaad is a mega-hit and this masterpiece has created a history in our drama industry and this serial will surely miss!

tweet
Share on FacebookShare on TwitterShare on PinterestShare on Reddit
Rameeza NasimFebruary 1, 2022
the authorRameeza Nasim
Rameeza Nasim, a Paralian, passionate about poetry, drama and fiction. By giving drama critiques I feel like I am endorsing the writer's message to the audiences, I love my job. Being a critic responsibility lies on my shoulders to point out the flaws and shortcomings of the play be it on writer's , performers or director's end . I did my Masters in English Literature and Linguistics .
All posts byRameeza Nasim