Rakshi gets married to Arif 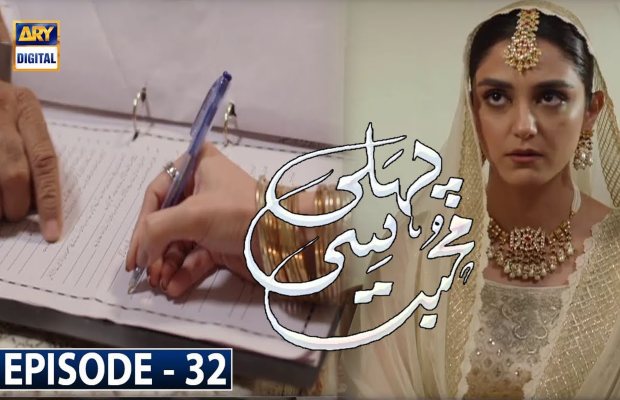 Pehli Si Muhabbat the love story airing at ARY Digital every weekend has come up with a heartbreaking episode. Despite how badly we all wanted Aslam to marry Rakshi, all our hopes died when we see Aslam has been stuck in Karachi, he has to take care of his Mamu and there Rakshi gets married to Arif.

It has shown that there comes situations that are stuck, and it is difficult to avoid such situations. In love, there come moments where you have to choose between love and obligation and just like what Rakshi did before, Aslam does this time he prefers his obligation and duty towards his Mamoo over his love for Rakshi. This time because of his call of duty he has to abandon Rakshi for the rest of his life. As Shakespeare rightly said,” the course of true love never did run smooth”.

Rakshi knows that she will not be able to get Aslam and her attitude is hopeless too. She is ready to marry Arif although her heart still beats for Aslam. Our heart goes out for poor Rakshi her father would have helped her out but he did not. The scene of Akram’s wife going there and asking her to forgive Aslam seems useless and additional.

Rakshi’s nikkah happens and still there is no sign of Aslam. Well, we have seen that there is a certain kind of resentment in Rakshi’s heart as she does not let her father give her his blessings but whatever she is doing is for the sake of her father’s honor and happiness. Nargis is also quite disappointed as she was expecting that Faizullah will help her daughter in getting her love but he has pushed her in a loveless marriage. Why in the name of saving his honor Faizullah has sacrificed her daughter’s true happiness.

Zainab’s ghost’s scene attired as a bride is quite a stretch and it seems to be have taken too much liberty of creative license. Zainab’s ghost is actually guiding Rakshi to behave nicely with her husband and not to commit the same mistake that she did in her life. Well Arif’s too much stress on Tum Muj se bohat choti ho is not making any sense. It seems that Arif is also pushed into this relationship as well his heart is not in this relationship. It is so heartbreaking to see two lovers do not get united and to see them separated in such unfortunate way.

tweet
Share on FacebookShare on TwitterShare on PinterestShare on Reddit
Rameeza NasimSeptember 6, 2021
the authorRameeza Nasim
Rameeza Nasim, a Paralian, passionate about poetry, drama and fiction. By giving drama critiques I feel like I am endorsing the writer's message to the audiences, I love my job. Being a critic responsibility lies on my shoulders to point out the flaws and shortcomings of the play be it on writer's , performers or director's end . I did my Masters in English Literature and Linguistics .
All posts byRameeza Nasim