Still, the chances and hopes of Rakshi and Aslam's union are so bleak. 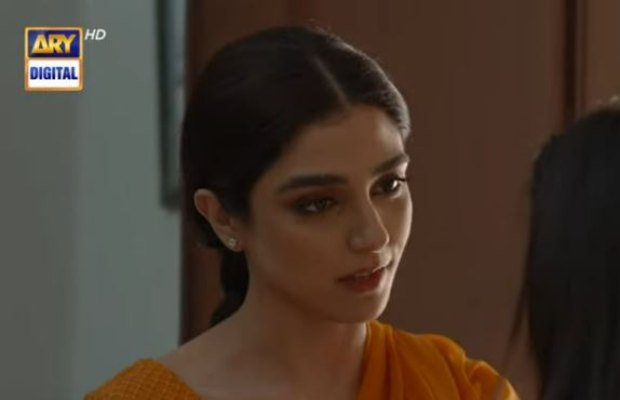 Pehli Si Muhabbat drama serial airing at ARY Digital is now 34 episodes down and still, it seems no hope of Rakshi and Aslam’s union. We all are wondering is it possible that we can see these two characters together since Aslam is now married to Bushra. After a time-lapse of 8 years in which we saw that Aslam is married to Bushra. The latest episode reveals that Rakshi is now a widow.

Rakshi is all set to welcome her daughter’s future in-laws. We have seen that her step daughter calls her Appi instead of Ammi but it does not mean that she has not accepted her as her mother. She says that she regards her more than a mother. Well Ahmad falling in love with Sadaf, Rakshi’s stepdaughter seems far stretched than just a mere coincidence. Hyderabad is not such a small town.

Aslam and Akram both decide not to go with the family to see Sadaf as they think it is more of a ladies’ affair. Rakshi welcomes the guests but she is shocked to see Akram’s wife and so is she. Bushra has never met Rakshi so she has not recognized her Isn’t it strange that Bushra is Aslam’s cousin but she has never met their old and so close neighbor keeping in mind how closely knitted their neighborhood was.

Aslam has named her daughter after Rakshi, we have come to know through this episode that Rakhsi’s real name is Darakhshaan. Well, it seems that Rakshi still lives in Aslam’s heart and he has not let Rakshi’s memories die despite of the fact that he is very loyal to his wife and never wants to compromise his loyalty. Aslam’s bhabi shares with him about Rakshi being widowed stepmother of Sadaf. Aslam leaves the city right in the middle of the night in a panic.

Aslam is married and he is the father of a daughter he cannot marry Rakshi now is a widow now. Oh what an unfortunate situation it is! Still, the chances and hopes of Rakshi and Aslam’s union are so bleak. Rakshi also deliberately avoids facing Aslam so she sends Sadaf’s phupho to Aslam’s house to see Ahmed. Rakshi goes to meet Nargis who tells her that her sister-in-law has called her, she is saying that after Sadaf’s marriage she will also marry off Rakshi as she is too young to live such a long life alone.

tweet
Share on FacebookShare on TwitterShare on PinterestShare on Reddit
Rameeza NasimSeptember 20, 2021
the authorRameeza Nasim
Rameeza Nasim, a Paralian, passionate about poetry, drama and fiction. By giving drama critiques I feel like I am endorsing the writer's message to the audiences, I love my job. Being a critic responsibility lies on my shoulders to point out the flaws and shortcomings of the play be it on writer's , performers or director's end . I did my Masters in English Literature and Linguistics .
All posts byRameeza Nasim