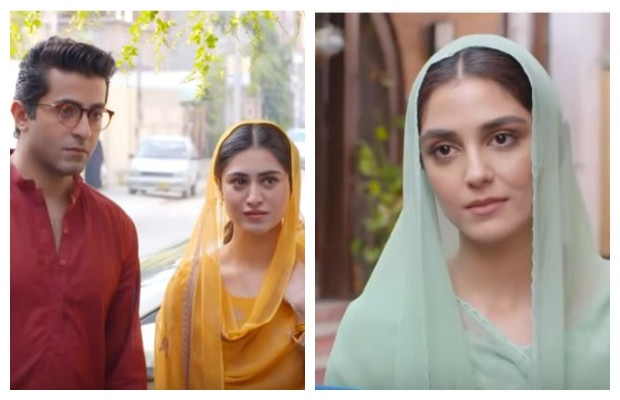 Pehli Si Muhabbat the drama serial airs at ARY Digital is 35 episodes down and the story turns to be quite upsetting. Poor Rakshi certainly does not deserves all this. In the previous episode, we have seen that Bhabi tells Aslam that Rakshi is the stepmother of Sadaf. In this episode, it is shown that Bushra also comes to know about this and her insecurities are not different than any typical wife.

The episode begins with Bhabi fearing and wondering about Aslam and Bushra’s future, she shares all her concerns with Akram. She is of the view that Aslam’s hiding away from this situation is evidence that he is still very much involved in Rakshi. Ahmed also gets to know that Sadaf is Rakshi’s stepdaughter and so does Bushra coincidentally hears this.

Bushra’s fears and insecurities are written all over her face. She has realized that Aslam has never forgotten Rakshi. That is why he has named his dear daughter after Darakshaan so that she lives in his heart and memories alive. Aslam never wants to forget Darakshaan that is why he has named his daughter after her. Well, Darakshaan seems a little odd name Rakshi’s real name should have been Rakshanda it will suit more with Aslam.

Rakshi’s mother and her sister-in-law want her to remarry and starts her new life after Sadaf’s marriage. Rakshi is in no mood to listen to such suggestions. Ahmed is fearing about his own relationship. Sadaf is insisting Rakshi to meet Ahmed for once but she is trying to avoid that situation by making excuses. Rakhsi just like Aslam is hiding from the situation she is fearing that her heart will stop if she ever going to face Aslam but little she knows that nothing much going to happen, Aslam is coming on her way.

Bushra is not behaving like a great wife, she is just behaving like any typical wife who has insecurities and fear of losing her husband. She insists Aslam to face Rakshi instead of avoiding her and act normally this is the only way through which she will get convinced. Well, what a cruel way of convincing oneself when Aslam is assuring her that he is never going to leave her ever. Bushra takes Aslam to Rakshi’s door. The moment Aslam and Rakhsi face each other is so heartbreaking and disturbing. God Why cannot these two lovers get united? What an unfortunate sequence of events. A heartbreaking episode!

tweet
Share on FacebookShare on TwitterShare on PinterestShare on Reddit
Rameeza NasimSeptember 27, 2021
the authorRameeza Nasim
Rameeza Nasim, a Paralian, passionate about poetry, drama and fiction. By giving drama critiques I feel like I am endorsing the writer's message to the audiences, I love my job. Being a critic responsibility lies on my shoulders to point out the flaws and shortcomings of the play be it on writer's , performers or director's end . I did my Masters in English Literature and Linguistics .
All posts byRameeza Nasim