Akram loses his head and beats the hell out of Faiz 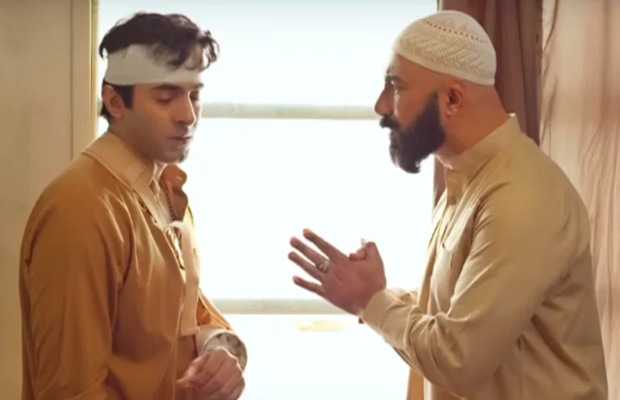 ARY Digital’s play Pehli Si Muhabbat takes us on an emotional roller coaster, touching the right cords. However, the story has turned quite tragic. In the previous episode, we have seen Sikandar badly beating Aslam and in this episode, we have seen that Akram once again loses his control and gets furious, he beats Faiz badly in revenge. Aslam is sent to Karachi with his Mamu while Faiz is all set to marry off poor Rakshi.

Aslam is not ready to leave Rakshi like that in such misery but then his mother and Akram pleads Aslam to go with his Mamu to Karachi for their sake. Aslam’s Mamu’s character is portrayed in such a positive light. He is shown as a thorough gentleman, despite facing so much disappointment by Aslam he is ready to help his mother out. Aslam’s heart still beats for Rakshi and he is not ready to give up.

Akram’s love for his brother is shown in a good light but Akram has serious anger issues. Upon seeing the face of Faiz he loses his control and beats the hell out of him. One feels sorry for Faiz for a while but then no, if he is such a gentleman then he should consider the fact that a girl’s consent is most important so how can he ignored this and force her to marry someone she hardly Knows?

Well, it was good to see Zainab melting her ice a bit when she tells her husband that she will only die for him but then the return of her coldness and aloofness seems annoying. When her husband takes her to Karachi to meet Aslam and when Aslam breaks the news that Sikandar is the one who is marrying Rakshi, Zainab could not bear this pain. Her heartbreak is so evident and we are wondering why Aslam is not easing her sister’s pain by telling her that Sikandar is the man who injured him. I think Zainab really needs to see Sikandar’s ugly side.

Our heart goes out for poor Rakshi whose own father is not talking properly with her and now Nargis has also started showing her a cold shoulder. She has told her friend not to give her any message of Aslam. Nargis is herself battling with her inner turmoil. One wonders what that evil Sikandar is going to do with Rakshi? Rakshi is going to be in a bigger mess. There is no possibility of Aslam and Rakshi’s union and their unrequited love is so heartbreaking.

tweet
Share on FacebookShare on TwitterShare on PinterestShare on Reddit
Rameeza NasimMay 11, 2021
the authorRameeza Nasim
Rameeza Nasim, a Paralian, passionate about poetry, drama and fiction. By giving drama critiques I feel like I am endorsing the writer's message to the audiences, I love my job. Being a critic responsibility lies on my shoulders to point out the flaws and shortcomings of the play be it on writer's , performers or director's end . I did my Masters in English Literature and Linguistics .
All posts byRameeza Nasim