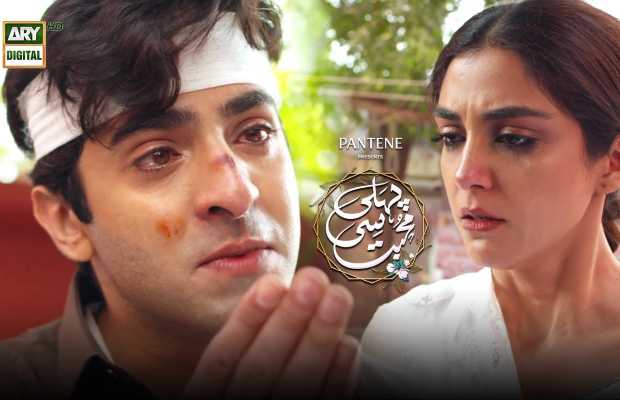 Pehli Si Muhabbat at ARY Digital being a strong serial with solid performances and thought-provoking dialogues has turned quite tedious. In the previous episode, we have seen enough mourning of Zainab’s death which still continues, we have seen almost every character crying.

The episode begins when Aslam is shaking Rakshi, blaming her for Zainab Appa’s death. He has told her that she has no place in his heart now. Rakshi is broken to hear that and then Aslam throws her out of the house. It looks so inappropriate the way Aslam and Rakshi are physically contacting in presence of all, in our conservative society no young male can touch a girl like that even in such a furious rage.

This episode is a stretched one with so many crying scenes. We are not okay with seeing Sikandar getting stable. He deserves severe punishment. Then Muraad enters the house and sees her wife’s room and belongings. Paras Mansoor as Muraad mourning his wife is so perfectly done but we have gotten tired of watching mourning from the last three episodes, the story must move fast.

Rakshi has realized that now she will never be able to get the same place in Aslam’s heart so she has decided that she will part her ways with Aslam. She tells her father that she is ready to obey whatever decision he is going to take for her but she requests that he takes his decision soon. Despite Nargis’s reasoning, Rakshi is not backing off, she is resolute that now she will not marry Aslam. She thinks that Aslam will always have a feeling that Rakshi is responsible for his sister’s death, he is never going to forgive her for not fulfilling her promise. I cannot comprehend why Nargis has issues with the neighbor guy, he is far better than Sikandar. Rakshi will relive Nargis’s life and in a way, she tributes Nargis for her selfless love.

Aslam has also hardened his heart, he is not getting out of his trauma. His mother despite being in grief still talking sense that her daughter has died according to the destiny he should not blame anyone or maybe she is saying this because she has no idea about what has actually happened. Aslam has made up his mind to move on and forget Rakshi forever, he tells his Mamu to take him to Karachi so he can come out of this depressing environment. Well, it seems that Aslam might marry Bushra.

tweet
Share on FacebookShare on TwitterShare on PinterestShare on Reddit
Rameeza NasimAugust 16, 2021
the authorRameeza Nasim
Rameeza Nasim, a Paralian, passionate about poetry, drama and fiction. By giving drama critiques I feel like I am endorsing the writer's message to the audiences, I love my job. Being a critic responsibility lies on my shoulders to point out the flaws and shortcomings of the play be it on writer's , performers or director's end . I did my Masters in English Literature and Linguistics .
All posts byRameeza Nasim