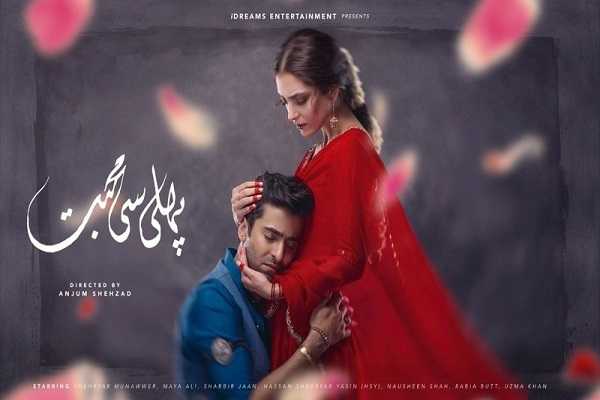 ARY Digital’s exquisite love story Pehli Si Muhabbat is getting more and more intense. Faiza Iftikhar has beautifully penned down a cute love story with so much depth and highlighted so many small issues and emotions in such a simple manner. In the previous episode, we have seen that Aslam finally manages to convince Rakshi that she is his only love interest and that Aslam is not happy with his engagement. This episode looks like Hajra’s background story and also an interesting development is that Nargis gets to know about Rakshi’s affair.

The episode begins when Hajra comes to her mother’s place for her brother’s marriage date fixing ritual. It is shown that there is an air of tension between Akram and Hajra. It is further shown that Akram still does not trust her sister and he shares this with his mother too who snubs him for mistrusting his sister. We are shown through flashbacks that Hajra wanted to marry somewhere else but her mother and brother fiercely opposed her decision and forced her to marry the boy of their choice.

Rakshi is getting ready for her date. She has dressed so well that even Nargis fails to ignore her she has sensed that there is something fishy. She asks her why she is going to her College so late? and why she has not gone with her father? Rakshi makes an excuse that she has her first two classes off. Nargis offers to escort her to the bus stop but Rakshi rudely ignores her offer. Nargis is shown as a good woman who truly cares for Rakshi like a mother but it is Rakshi who is not yet ready to accept her.

Rakshi and Aslam share many lovely moments in their date at the park. Rakshi shares with him her childhood memory that how her sister Hajra Appi’s forced marriage has broken her heart. It also made Aslam sad. Aslam is happy to see his sister at home. He seems to be very close with his sister. He shares with her that he does not want to marry Bushra and  he also expresses his true feelings for Rakshi. Hajra Appi does not make any promise to help him out as she says that she could not help herself so how will she able to help him but she says that she will convey his message to her mother. She advises Aslam that before taking Rakshi’s name he should first tell his mother that he cannot marry Bushra.

Nargis questions Rakshi that from where she is coming and tells her that her classmate has come to their house asking for her. Rakshi is scared to death to know that Nargis has caught her lie. She is too frightened when her father asked her about the morning but to her surprise, Nargis covers her by saying that she has gone to college. Instead of being grateful to her, Rakshi is still being rude to her but Nargis tells her that she should fear the day when her father gets to know about her affair.

tweet
Share on FacebookShare on TwitterShare on PinterestShare on Reddit
Rameeza NasimFebruary 23, 2021
the authorRameeza Nasim
Rameeza Nasim, a Paralian, passionate about poetry, drama and fiction. By giving drama critiques I feel like I am endorsing the writer's message to the audiences, I love my job. Being a critic responsibility lies on my shoulders to point out the flaws and shortcomings of the play be it on writer's , performers or director's end . I did my Masters in English Literature and Linguistics .
All posts byRameeza Nasim