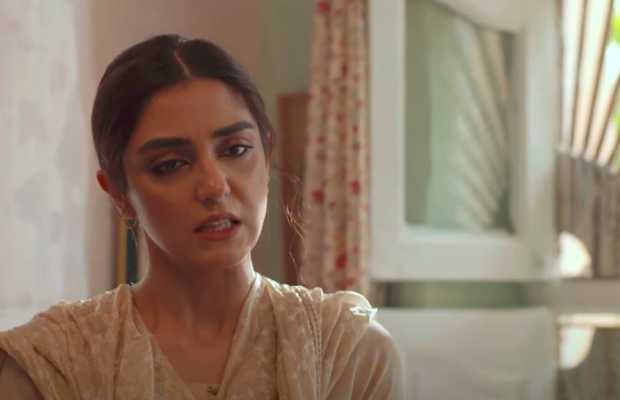 Pehli Si Muhabbat  one of the most interesting Prime Time Watch starring Maya Ali and Sheheryar Munawar on ARY Digital. It seems a fascinating tale of unrequited love woven so beautifully with real-life characters. In the previous episode, we have seen how the neighbor baji Nuzi is cashing after Aslam. In this episode find that Nuzi’s greed has no limit, she has also started blackmailing poor Rakshi.

Rakshi’s father is happy to meet his old friend and he is happy with the proposal. He wants to marry her off as soon as possible. Nargis seems a little reluctant she tells her husband that Rakshi is too young and secondly she has some reservations about the age of the boy. Despite Nargis disapproval, Faiz still wants to accept this proposal. Rakshi tells Aslam about the proposal and asks him that what she should say to her father? Aslam becomes speechless and drops the call.

The super greedy Nuzi Appa is now cashing on poor Rakshi, she has sensed the fear in the eyes of timid Rakshi and this is what she has started blackmailing her for. Initially, she takes her perfumes but her greed has not stopped at small things. Nuzi is eyeing poor Rakshi’s jewellery. She asks Rakhi to borrow her mother’s gold jewellery. Here the way Rakshi reacts seems that she is not that fool she has not agreed on giving her but then she blackmails her. Poor Rakshi is under immense pressure, she breaks out and Nargis is silently noticing all this.

Then there is a track of Zainab Appa’s story going side by side, she is having an unhappy marriage and burdened by memories of unrequited love. Her husband is fed up with her cold behavior and he smashes a glass bottle at her head in a fit of anger but later he regrets and begs forgiveness. Here Zainab’s character is not making any sense at all after so many years of her marriage, being a mother of two she treats her husband like nobody, she does not talk normally with him which seems annoying. After having two children and years of marriage she is still that cold-turkey to her husband is not making any sense and seems unreal.

Rakshi tries to call Aslam, she wants to share with him her anxiety but Aslam’s phone has turned off his phone. Aslam is spending a night at Zainab’s house and she has asked her to turn off his phone so that her mother cannot call him. Rakhsi’s misery is real. Don’t you think Rakshi should share all this with Nargis about her and Aslam’s love when Nargis herself has offered her help?