Rakshi is fearing that Sadaf might not approve her marriage. 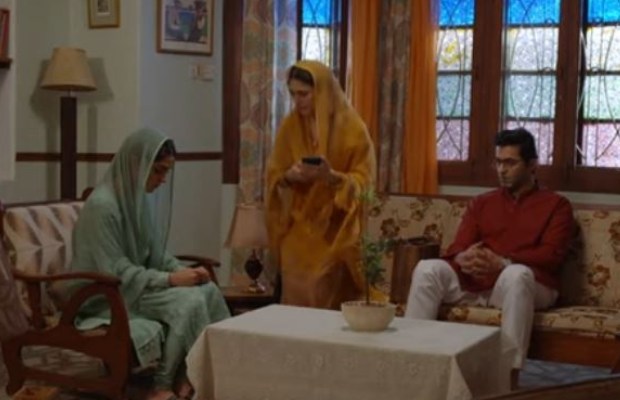 Pehli Si Muhabbat the love story after airing its 37th episode is finally moving towards its conclusion. In the previous episode, we have seen that Bushra is having insecurities and fear. While in this second last episode,  Bushra faces her fears bravely, and like a generous lady, she allows Aslam to have the love of his life.

Bushra forcefully takes Aslam to Rakshi’s house, she wants Aslam to face Rakshi, well at the moment it feels like Bushra is so cruel but our heart goes out for her when we see her helplessness. Her fears and insecurities get the ultimate assurance when she sees her husband facing the love of his life. She has no choice but to surrender.

The moment when Aslam and Rakshi face each other is such a heartbreaking scene we feel that Bushra is so cruel that she has made them go through that pain. Sheharyar Munawar and Maya Ali’s performances are simply brilliant in this scene. Aslam pays condolences to her for her father’s and husband’s death and the pain and reluctance he goes through by saying her husband is so painfully and it is deeply felt.

Akram and his wife come to know about Aslam and Bushra’s sudden visit to Rakshi’s place. Akram’s wife is fearing for Bushra and her future in her relationship with Aslam while Akram is kind of excited he wants to give his brother his lost happiness. Akram’s wife being rude and straight to Rakhsi is so heartbreaking. Nargis on the other hand is encouraging Rakshi not to discourage any advances Aslam make. Rakshi is fearing that Sadaf might not approve of her relationship like she did for Nargis. Nargis explains to her that her situation is different as her father is dead.

Bushra has understood that Aslam will never forget Rakshi. It is Rakshi who has ruled his heart since forever and now it is just because of her, she is coming in between Aslam and his happiness. Bushra makes a big decision, she is being great she tells Aslam to marry Rakshi and despite Aslam’s reluctance and arguments he finally agrees. Bushra is keen to persuade this matter she tells him to go to Hyderabad the next day to convince Rakshi and later she agrees that she will come along to convince Akram Bhai and Bhabi. Will Rakshi agree? We are really feeling sorry for Bushra.

tweet
Share on FacebookShare on TwitterShare on PinterestShare on Reddit
Rameeza NasimOctober 4, 2021
the authorRameeza Nasim
Rameeza Nasim, a Paralian, passionate about poetry, drama and fiction. By giving drama critiques I feel like I am endorsing the writer's message to the audiences, I love my job. Being a critic responsibility lies on my shoulders to point out the flaws and shortcomings of the play be it on writer's , performers or director's end . I did my Masters in English Literature and Linguistics .
All posts byRameeza Nasim