The feudal mindset may create differences in Samra and Fahad's relationship 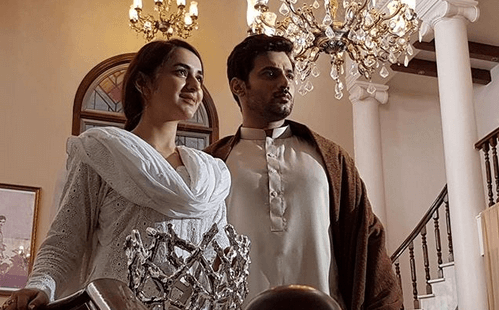 The third episode of Pukaar aired on ARY Digital and to our utter dismay, the poster hero, Sarang is still missing from the scene. We saw his last week gazing at Samra with such intensity but that was it, Zahid Ahmed still needs to make a proper entry to the show. And we hope its not too late.

Over the course of three episodes we’ve come across Samra and how the difference in mindsets between her family and the feudal in laws she have now, is now creating trouble for her.

The episode begins with Samra coincidentally eavesdropping on  Fahad and his mother’s conversation about herself. Samra is appalled on hearing what Fahad and his mother are talking about. It seems the family is very close minded and they need to put the same restrictions on Samra as well. But since she has Fahad’s support for now, she is fine as long as he is by her side.

Samra is also shocked how his disciples revere Fahad. Although he isn’t any leader for them but they still devote themselves to him out of sheer love. When she sees one of the disciples kissing his hand, she is shocked and enters the drawing room without any second thought. Fahad and his father are utterly shocked but Samra is hoarded away by the family’s maid. Meanwhile along with tell him how he wants Fahad to contest the upcoming election, his father firmly asks him to tell Samra her place and position in the house.

Fahad’s mother is really furious regarding Samra’s choice of nightwear but Fahad intervenes and handles the situation with ease. On the other hand, Samra is rather angry at Fahad and how he allowed someone to kiss his hands out of obedience. Fahad tries to placate her by saying that this is how it goes in his family. But Samra cannot concede and this is why when a similar village lady is about to kiss her hand in reverence, she snatches it back saying she is no different than any of them. And this enrages her mother in law further.

Over the course of days, Samra and Fahad have been subjected to a number of issues, starting from how they are now becoming involved with the family’s and their village affairs. Samra is not able to please her in laws and to her disappointment, they will not be moving to the USA as well.

Samra is very worried?  Will she live in the village and accept all the feudalistic norms and rituals and will she adopt them ? An overall intense episode, it seems trouble has begun for Samra. Currently Yumna Zaidi holds the show together on her shoulders. She is near perfect in her portrayal of the agitated Samra but so is the rest of the supporting cast. Direction by Farooq Rind needs no praise, it speaks for its own.

But when will Sarang make an appearance? We’re intrigued and we want Zahid Ahmed in the drama ASAP!

tweet
Share on FacebookShare on TwitterShare on PinterestShare on Reddit
Rameeza NasimFebruary 27, 2018
the authorRameeza Nasim
Rameeza Nasim, a Paralian, passionate about poetry, drama and fiction. By giving drama critiques I feel like I am endorsing the writer's message to the audiences, I love my job. Being a critic responsibility lies on my shoulders to point out the flaws and shortcomings of the play be it on writer's , performers or director's end . I did my Masters in English Literature and Linguistics .
All posts byRameeza Nasim