Abdullah audits Munshi Jee's file and realizes that he was innocent 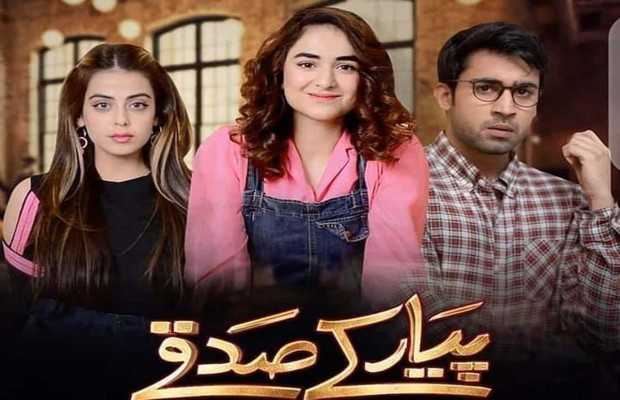 In this episode is Sawar's game over? - OyeYeah Drama Reviews
0Share
895Views

Pyar Ke Sadqay the drama serial running at HUM TV is one the classiest and finest drama serial in the running. It seems that the play is moving fast towards its ending and it has eventually reached its climax. Mansoora (Atiqa Odho) finally sees Sarwar’s (Umair Rana) ugly self and she realizes that she has wronged her children all her life just because of Sarwar. Performances are incredible particularly Atiqa Odho’s performances outshine in this episode.

The episode begins when Sarwar is telling Shanzay to keep an eye on Abdullah’s whereabouts. Abdullah brings fruits and stuff for Mahjabeen and there Washma tries to put some shame in him by saying that he simply does not deserve a pure girl like Mahajabeen who cannot bear any word said against her husband whereas he truly deserves Shanzay kind of girl who looks down at him and treats him the way she likes and even insults him. Abdullah really feels bad to hear this.

Abdullah shares about Mahjabeen’s pregnancy and it becomes a turning point for Mansoora’s relationship when he sees Sarwar’s fierce reaction on it. It seems that all her suspicions against Sarwar are getting stronger and she for the first time snubs him for beating Abdullah. Sawar is getting mad at Abdullah when he hears about Mahjabeen’s pregnancy news and he is trying to bring out all his frustration at Abdullah but Mansoora saves him.

Mansoora goes to Mahjabeen’s house and asks her to tell her the reality of Sarwar and what actually he did to her. Mahjabeen’s mother when tells her the truth, she asks Mahajbeen to call Sarwar and put the phone on speaker. Mahjabeen calls Sarwar and tells him that she wants to meet him on which Sarwar says that what she has done with him, he wanted to make her his queen, and now what is going to happen with her? Shanzay will kick her out of the house. Sarwar’s all ugliness is now fully revealed in front of Mansoora, she has realized that she is being fooled by him for so long.

Mansoora tells Abdullah to join her office and audit Munshi Jee’s files as she doubts Sarwar. Mansoora is being so late in doing this. Abdullah audits Munshi Jee files and he comes to know that he was innocent. Mansoora tells her lawyers that she is disassociating Sarwar from his company and now Abdullah will head the company moreover she tells his lawyer to prepare divorce papers too. Is Sarwar’s game over now?

tweet
Share on FacebookShare on TwitterShare on PinterestShare on Reddit
Rameeza NasimAugust 8, 2020
the authorRameeza Nasim
Rameeza Nasim, a Paralian, passionate about poetry, drama and fiction. By giving drama critiques I feel like I am endorsing the writer's message to the audiences, I love my job. Being a critic responsibility lies on my shoulders to point out the flaws and shortcomings of the play be it on writer's , performers or director's end . I did my Masters in English Literature and Linguistics .
All posts byRameeza Nasim