Character portrayals of Yumna and Bilal are brilliantly done 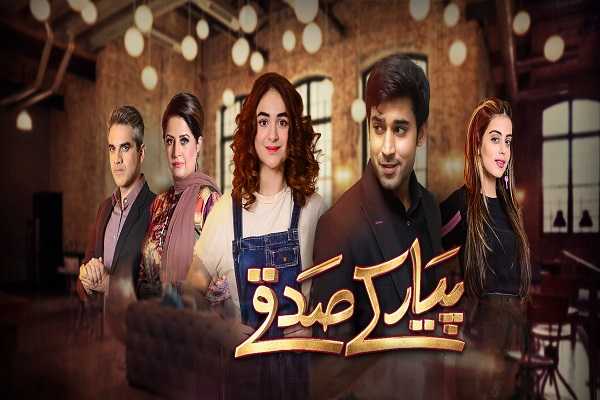 HUM TV has aired the very first episode of Yumna Zaidi and Bilal Abbas starrer drama serial Pyar Ke Sadqay. The story revolves around two weirdos Abdullah and Mahjabeen, they both live in their own world of dreams. Drama is penned down by Zanjabeel Asim Shah and it is directed by Farooq Rind. The setting of the play seems to be cute and unique. The prettiest Yumna Zaidi is shinning out in the whole play and Bilal Abbas too is brilliantly performing his role. The first episode is showing the beginning of a very sweet but intense love story.

The opening scene portraying a sweet girl Mahajabeen who in her dreams is topping in her class but in reality, she has once again failed and she is going to repeat her class. It seems that she is facing great difficulty in studying and she is finding a way to escape the studies and for that, the perfect solution is getting married. Mahjabeen is pleading her mother to marry off her as soon as possible.

Abdullah is also shown as a perfect match for Mahajabeen as he has flunked in his University exams but he has topped in Mathematics, it seems that he is forced to study business as his father who seems to be not his real father wants him to study business. Abdullah is infatuated by a very lively girl in his University but she thinks of him as a weirdo like anyone else. Abdullah shares his feelings for that girl with her phupho who suggests him to confess his feelings for her.

Mahajabeen is delighted to know that her Chachi has brought a Doctor’s proposal for her, she is super happy that she will not have to study anymore. Mahajabeen is Abdullah’s Munshi’s daughter. She is just like Abdullah living in her own world of dreams. It is such a sweet scene where Mahajabeen is bugging Abdullah saying that she has cleared her exams and now she is going to marry and will forever be rescued from studies, she advises him to do that too on which Abdullah sweetly says that “Mai tu boy hoon”

The play is also laying stress on the rigid academic structure and the traditional rotten method of teaching in which students feel burdened to study instead of enjoying it, they want to escape studies at any cost even at compromising their own freedom in the name of marriage. Abdullah is a genius of Mathematics but he is forced to study business and that is why he is continuously flunking in other subjects.

tweet
Share on FacebookShare on TwitterShare on PinterestShare on Reddit
Rameeza NasimJanuary 25, 2020
the authorRameeza Nasim
Rameeza Nasim, a Paralian, passionate about poetry, drama and fiction. By giving drama critiques I feel like I am endorsing the writer's message to the audiences, I love my job. Being a critic responsibility lies on my shoulders to point out the flaws and shortcomings of the play be it on writer's , performers or director's end . I did my Masters in English Literature and Linguistics .
All posts byRameeza Nasim