Mahjabeen says she will take revenge for his father's death 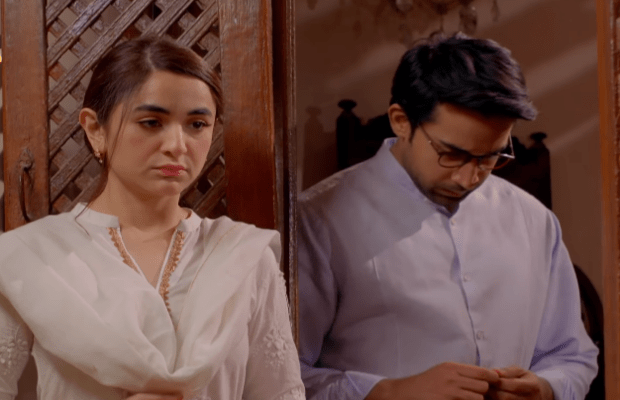 Pyar Ke Sadqay one of the classiest drama serial running at HUM TV is now getting tenser and tenser, we are missing that happy go lucky Mahjabeen. This episode is another heart wrenching one where Mahjabeen’s miseries seem never-ending. Throughout these episodes, we have seen the growth of both Mahjabeen and Abdullah’s characters. Bilal Abbas and Yumna Zaidi have given impeccable performances.

Mahjabeen scenes were so cute and innocent where she in her own style missing her father. The way she asks her mother that will his father be missing her too sounds so cute. While missing her father she is also missing Abdullah, she wishes that her father in eternity prays for her and Abdullah’s union and also that Abdullah does not marry Shanzay.

Washma is one of the strongest and the most inspiring character of this play, she confronts Sarwar apparently looks like her mistake and because of that Sarwar gets even more alert but we have seen that Sarwar becomes speechless in front of Washma and his defeat is written all over his face. She clearly challenges him that she will protect Mahjabeen like she is protecting herself.

We have seen a slight change in Mansoora’s character but not a major change. When Abdullah says that he does not want to divorce Mahjabeen she tells him not to divorce her and does not share this news with Sarwar. The way she says that we do not need to tell Sarwar everything says that she is on a way to gather some courage. Abdullah despite Shanzay’s clear cut threat that she will not marry him if he is not going to divorce Mahjabeen, still cannot make himself sign the papers. It looks so strange that Mansoora tells Abdullah not to divorce Mahjabeen and he should not need to tell Shanzay like why she is telling her son to cheat Shanzay instead of that she should have told him to break his engagement.

The scenes where Abdullah takes Mahjabeen to his father’s grave are so intense and there Mahjabeen is resolute that she will work hard and will become rich and then she will take her father’s revenge from all those who are responsible for his death makes Abdullah even more uncomfortable. The way she says that “Allah tu muj say payar karta hoga na itni bhi gayee guzri nahi hoon mai wo meri madad karega ” sounds so cute and innocent. Sarwar still calls and hounds Mahjabeen and her mother but her mother bravely confronts him. Will Abdullah be able to resist Sarwar and Shanzay’s pressure and not divorce Mahjabeen? Will Mahjabeen’s wish of her and Abdullah’s reunion going to be fulfilled? Will Washa be able to protect Mahjabeen from Sarwar?