Moosa takes all the blame on himself and saves Sakina 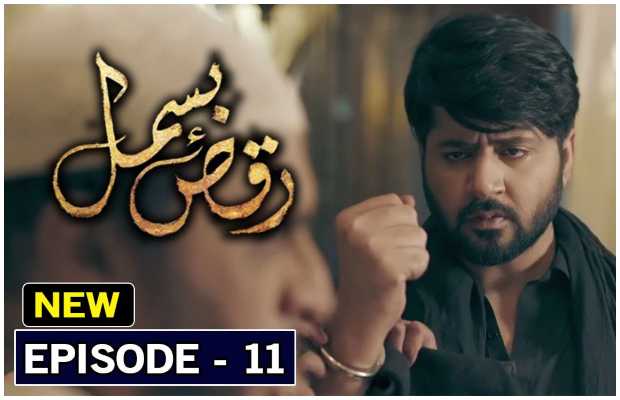 Imran Ashraf starrer Raqs e Bismil seems a bit lost from the main track, although performances are powerful as usual. In the last episode, we have seen that Sakina is trapped by her lover’s loafer friends who are about to rape her. In episode 11, we have seen that Moosa is back to his old self, he saves Sakina like a true brother.

Moosa rescues Sakina like a Knight in armor. Moosa’s act is justified he behaves like any brother who fights to save his sister’s honor. Moosa becomes hot-headed and he shoots all the three men who were trying to rape Sakina. Sakina has been embarrassed so much that she asks Moosa to shoot her too but this time it is Moosa who covers her. Moosa advises Sakina not to share this incident with anyone and she should start her life with Essa who truly deserves her. He tells her that she should not think about the one who left her alone with his beastly friends.

Well, Moosa’s act is not hidden from the world. Surprisingly neighborhood of that location is shown super smart that they have noted Moosa’s jeep number as well as they have also noticed Sakina. Police once again raids at Moosa’s Haveli with his arrest warrant. Moosa admits his crime but he does not share the whole story, he covers Sakina. Moosa’s father is mistaking Moosa for doing all that for Zohra and Moosa lets his father think like that, he does not try to correct him. Moosa’s father once again disowns him.

One of the weird things is that Sakina is having a change of heart. She is realizing that she has wronged Moosa. It is Moosa who is always protecting her like a true brother but she always hated him for that. It is Moosa who takes the whole blame of the incident on himself and saves her honor but Sakina has never tried to stop her Taya from abandoning Moosa like that. She never attempts to take Moosa’s side, this is the least we are expecting from a daring girl like her.

Sitara’s parents on hearing that Moosa is in police custody officially breaks her engagement with Moosa. Sitara’s undying affinity is literally making no sense, they have no history of interaction so how come Sitara is not ready to give up just a month-old so-called relationship?

Malik Sheharyar on the other hand is trying his tactic to trap Zohra for marrying him by sending Anna jee legal notice to leave the place.

tweet
Share on FacebookShare on TwitterShare on PinterestShare on Reddit
Rameeza NasimMarch 8, 2021
the authorRameeza Nasim
Rameeza Nasim, a Paralian, passionate about poetry, drama and fiction. By giving drama critiques I feel like I am endorsing the writer's message to the audiences, I love my job. Being a critic responsibility lies on my shoulders to point out the flaws and shortcomings of the play be it on writer's , performers or director's end . I did my Masters in English Literature and Linguistics .
All posts byRameeza Nasim