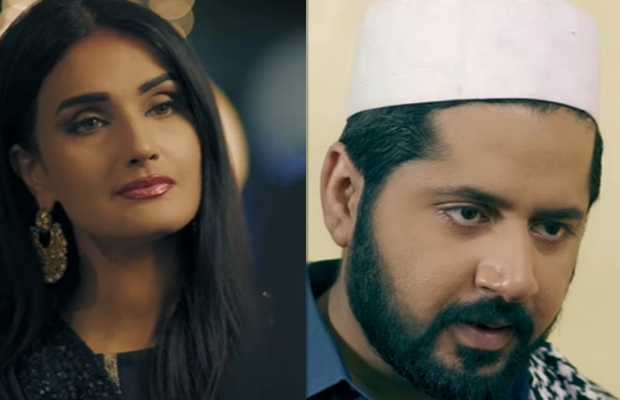 Raqs e Bismil the play airing at HUM TV is now 13 episodes down. In the previous episode, Zohra (Sara Khan) and Malik Sheharyar’s nikkah took place. In this episode, we have seen that Moosa (Imran Ashraf) bails out of the jail and he starts living with Namuraad. Well, the best thing about this episode is the much-anticipated entry of Zara Sheikh as Laila Tariq. Although the introduction of Zara seems a little underwhelming.

Zohra gets married to Malik Sheharyaar, who on his wedding night starts showing his true colors to her. Malik clearly tells Zohra that he does not want a typical homemaker wife, he wants a social girl like her who can help him out in business parties and his business deals. His behavior is clearly indicating that he does not respect his wife as he keeps reminding Zohra of her background.

Moosa bails out of the Jail but as his father has abandoned him he does not dare to return to his home back. Those three boys have given a statement in favor of Moosa one wonders how it becomes possible? Moosa has started living with Namuraad who if we all remember happens to be a Panwala who has a stall near Zohra’s house but surprisingly he lives in quite a well-to-do house. Well in a city where accommodation is so expensive, a Paanwala having such decent housing seems quite unrealistic.

Secondly, we come to know that Namuraad works in the film industry as a lyricist and he is still working there but if he works there then how come he runs the stall as a Panwala too all the time, it is making no sense at all. Well, Moosa being a man of dignity requests Namuraad to get him some work. Namuraad takes him to the film industry where he introduces him to Laila Tariq a former film actress and now a film producer. It seems that working in the film industry Moosa is going to bring more disgrace to his family name.

Issa meets Sitara in a very low-class market well one wonders what is a Syedzadi like her doing in such a bazaar? She tells Issa that Zohra is not the girl who was with Moosa on that day. Issa is wondering that who might be the girl then? Zara’s first introduction in the play is quite underwhelming, Malik introduces her as a former film actress who ruled the industry in this case at least Zohra should have recognize her. Laila tells Zohra that she should prepare herself for such kind of parties as Malik has married her for this purpose only. Well, it seems that Laila is going to have a pivotal role in the plot.

tweet
Share on FacebookShare on TwitterShare on PinterestShare on Reddit
Rameeza NasimMarch 22, 2021
the authorRameeza Nasim
Rameeza Nasim, a Paralian, passionate about poetry, drama and fiction. By giving drama critiques I feel like I am endorsing the writer's message to the audiences, I love my job. Being a critic responsibility lies on my shoulders to point out the flaws and shortcomings of the play be it on writer's , performers or director's end . I did my Masters in English Literature and Linguistics .
All posts byRameeza Nasim