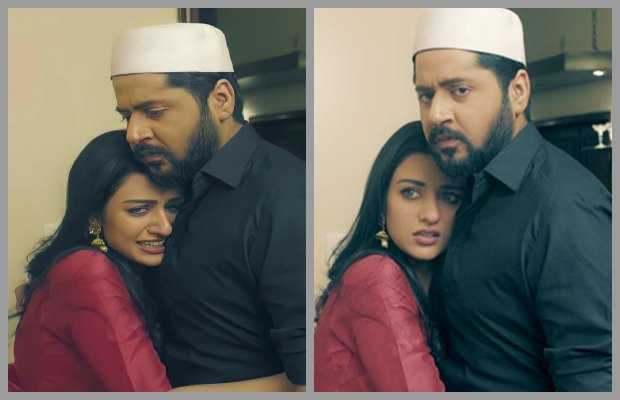 Raqs e Bismil the drama serial airing at HUM TV despite having too many flaws in the plot is still quite a fascinating love story and on top of that Moosa’s portrayal is what makes this serial a super hit. In the previous episode, we have seen how Moosa intervenes in the room where Shebaaz Gill is trying to trap Zohra. Moosa becomes Zohra’s Knight in shining armor and saves her.

Moosa’s sudden entry into Shebaaz’s room has startled Shebaaz, then he sees how Zohra takes his name and clings to him. Shebaaz has realized that they both share some history. Moosa points his pistol towards Shebaaz and he is all set to kill him when Zohra begs Moosa not to kill him and she gives him her own sake. Moosa stops just for the sake of Zohra. This whole scene is such a powerful one where Moosa and Zohra’s deep soul connection is clearly visible, performances are impeccable.

Moosa’s daring step also raises questions and doubts in Laila jee’s husband’s mind. Although Laila says that she has full confidence and believes in her bodyguard, she thinks that whatever Moosa has done he must have done in good faith and she also tells her husband that she knows what kind of beastly nature Shebaaz Gill has. Well Laila’s husband himself is plotting against her.

Shebaaz Gill shows CCTV footage to Laila’s husband and also to Malik Sheharyaar. Malik Sheharyaar who is posing like he is the most liberal person on earth who has no issues with his wife having any relationship with Shehbaaz, slaps hard on Zohra’s face when Zohra admits that Moosa is her lover. The scene where Malik Sheharyaar’s family his elder brothers are meeting him seems so unreal and they are not looking like real characters. Anyways, Malik Sheharyaar confirms to his brothers that he is never going to give Zohra a typical wife status nor he wants any child from her. However, Malik Sheharyaar’s brothers were still demanding him to divorce her.

Laila jee gets worried when she hears that Moosa has left her place without informing. Later Issa comes to meet Laila and he asks her for his brother’s whereabouts. He tells her that the salary she pays to him is what his mother used to pay off daily as his sadqa and he also tells her that he is the eldest son of Peer Qudrat Ullah. Laila’s husband is the happiest person in Moosa’s absence, he is plotting Laila’s murder making the best of Moosa’s absence. Will Moosa get into bigger trouble? Will Zohra and Moosa ever going to unite?

tweet
Share on FacebookShare on TwitterShare on PinterestShare on Reddit
Rameeza NasimApril 20, 2021
the authorRameeza Nasim
Rameeza Nasim, a Paralian, passionate about poetry, drama and fiction. By giving drama critiques I feel like I am endorsing the writer's message to the audiences, I love my job. Being a critic responsibility lies on my shoulders to point out the flaws and shortcomings of the play be it on writer's , performers or director's end . I did my Masters in English Literature and Linguistics .
All posts byRameeza Nasim