Moosa helps in Issa and Sakina's patch up 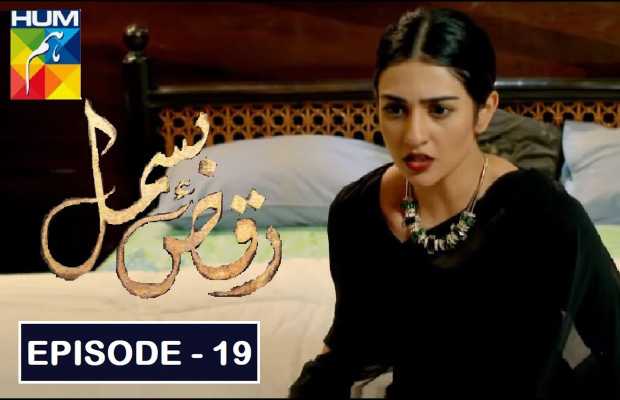 Raqs e Bismil airing at HUM TV is indeed one of the much-awaited drama serial as audiences are anxious to see Moosa and Zohra’s love bloom. However, Zohra’s character is making no sense at all. In the previous episode, we have seen that Laila jee is resolute to unite Moosa with Zohra at any cost. In this episode we see Zohra and Moosa facing each other but once again Zohra is not ready to start a life with Moosa. Why?

Well, one wonders what kind of superhuman Namuraad is? He is apparently a Paan Wala and he also works as a lyricist in the film industry and he also got numerous connections in the world of crime. He has a fleet of men who he hires to solve Moosa’s matters. It is Namuraad’s men who inform Moosa about that hitman Touqeer hired for Laila Jee and now Namuraad is the one who has planted men in front of that house where Moosa rescued Sakina from that goons. It is Namuraad who informs Moosa that Issa has learned all the reality. It makes no sense and it does not sound believable at all.

The scene where Moosa meets his brother Issa and warns him not to hurt anyone and the way he owns his sister Sakina is so heart-touching. Moosa is a noble person and this makes us fall in love with his character. Moosa is a true hero, the way he defends Sakina and the way he tells Sakina’s ex-lover to forget everything and to move on when he hears that Sakina does not want to go with him. The empathy and benevolence of Moosa’s expression are so perfectly performed by Imran Ashraf.

Zohra’s character is not making any sense. When Malik Sheharyaar is clearly given her final notice that he cannot carry this relationship, he has to divorce her as he cannot stand against his family. He also reminds Zohra that their relationship is merely a business deal but still Zohra has hopes for this relationship or maybe she is thinking for Moosa’s good. She once again meets Moosa making him the happiest person by confessing her feelings for him but then she begs him not to come in her way why? Why Malik Sheharyaar follows her when he has made up his mind to divorce her? We wonder where Moosa and Zohra’s is love story going to lead?

tweet
Share on FacebookShare on TwitterShare on PinterestShare on Reddit
Rameeza NasimMay 1, 2021
the authorRameeza Nasim
Rameeza Nasim, a Paralian, passionate about poetry, drama and fiction. By giving drama critiques I feel like I am endorsing the writer's message to the audiences, I love my job. Being a critic responsibility lies on my shoulders to point out the flaws and shortcomings of the play be it on writer's , performers or director's end . I did my Masters in English Literature and Linguistics .
All posts byRameeza Nasim