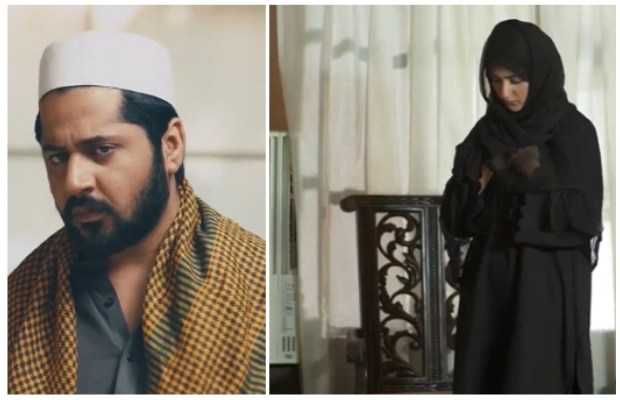 Raqs e Bismil’s latest episode is dragging the plot, there is no such development of the story. Moosa (Imran Ashraf)  and Saranga’s goons are still searching for Zohra (Sarah Khan), Moosa believes that if his heart is going fine it means that Zohra is alive and she is unhurt. This sort of passion is what makes Moosa’s character so strong and attractive. In the last episode, we have seen that Zohra starts living in Neeli Gumbat Haveli as Peer’s Sahab’s special guest. In this episode, we have seen that Zohra meets her sister in that Haveli.

The episode begins when Saranga goons are threatening Faizi at gunpoint to tell them about Zohra but poor Faizi has nothing to tell, he reiterates that Zohra has escaped from his car. Saranga orders his goons to throw him and his wife in jail. Saranga tries to prepare Moosa for any worse situation but Moosa’s firm belief in his Allah and love is so powerful that he strongly believes that if he is alive then Zohra must be alive and unhurt too.

Well, it seems that Allama Sahab’s novice Ahmad is going to play a pivotal role in coming episodes. Ahmed has created a special place at Peer Qudratullah’s heart and the way he asks him about his plans of settling down and getting married seems that Peer Sahab is cooking something in his head. Most Probably he is thinking of making his match with Zohra who he has observed praying Namaz.

Then there are few unnecessary scenes of Laila jee in these episodes just serving the purpose of fillers. Zara Shaikh’s performance is so poor as well as the direction. The way Laila jee is so careless about her own hard-earned money looks so unrealistic. Then her meeting with Tauqeer the way she tells him that she knows his true face and also tells him not to show his face again is so poorly done.

Zohra is living peacefully at Moosa’s house. Sakina is being too close and friendly with her, she tells her everything that happened with her family. She tells her everything about Moosa and also about that incident which Moosa has strictly forbidden her not to tell anyone. Zohra is cursing Zohra while being Zareen. Moosa’s mother is being too kind to Zohra, she offers her if she wants to meet her Anna jee and sister. Zohra tells her that she does not want to create any problem for her but still, Moosa’s mother calls Zohra’s sister, and strangely her sister instead of calling her Zohra calls her Zareen? Will Moosa be able to find Zohra? Is Zohra and Moosa’s union possible?

tweet
Share on FacebookShare on TwitterShare on PinterestShare on Reddit
Rameeza NasimJune 19, 2021
the authorRameeza Nasim
Rameeza Nasim, a Paralian, passionate about poetry, drama and fiction. By giving drama critiques I feel like I am endorsing the writer's message to the audiences, I love my job. Being a critic responsibility lies on my shoulders to point out the flaws and shortcomings of the play be it on writer's , performers or director's end . I did my Masters in English Literature and Linguistics .
All posts byRameeza Nasim