For Zohra the honor, respect, and respectful status seem more worthy than any other thing 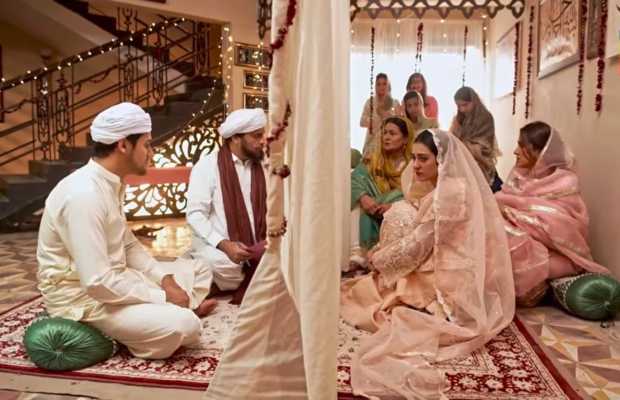 Raqs e Bismil drama serial which has glorified Moosa as one of the noblest romantic heroes finally concluded. The ending is unexpectedly a happy one, we were expected a sad ending keeping in the mind the title and record of the writer’s previous work. His plays usually end at the death of the protagonist. So we are fearing that this play might be a tragedy as well as Hashim Nadeem’s previous plays but to our surprise story ends on a very happy note.

The episode begins with Zohra saying yes to Peer Qudratullah’s suggested proposal of Ahmad. All ladies of the house are shocked at Zohra’s reply but they have not displayed their disapproval in front of Peer Sahab. Peer Sahab gets angry when Saranga and his goons visit him asking for Zareen’s hand for Moosa. It is for the first time Peer Sahab thought that Zareen might be Moosa’s Zohra.

Moosa’s in a furious range storms into his house holding Zohra’s hand and trying to take her away but it is Zohra who refuses to go with him saying that she will marry where ever Peer Sahab will marry her off and she is not going with him. For Zohra, the honor, respect, and respectful status seem more worthy than her love for Moosa. She loves Moosa but not as passionately as he loves her. She ensures Peer Sahab that all she wants his consent and she will marry where ever he will to marry her off respectfully but she will not go back to her old life.

Peer Sahab’s character is shown very stoned heart person. Despite knowing that Zohra and Moosa so passionately love each other he is persistent for Ahmad and Zohra’s nikkah. It is Ahmed and Allama Sahab who then eventually succeeds in instilling some sense and conscience in Peer Sahab. The Nikkah scene where Peer Qudratuallah asks Zohra’s consent and takes Moosa’s name is such a powerful scene.

The last episode is quite powerful and heart touching unlike the rest of the play. We will surely miss Moosa. The ending scenes of Moosa and Zohra are so beautifully shot. Sarah Khan and Imran Asharaf have given incredible performances. The episode ends on Zohra and Moosa’s happy union which is quite unexpected. Saranga and his goons Halagullah at Nikaah outside Peer’s house looks cute but it is an additional scene. The ending dialogues between Moosa and Zohra are so powerful and beautiful. Overall a heart-touching episode.

We will crave Moosa’s character on screen like we used to do for Bhola and this is the mastery of Imran Ashraf as an actor he has proved himself as one of the finest in the craft.

tweet
Share on FacebookShare on TwitterShare on PinterestShare on Reddit
Rameeza NasimJuly 10, 2021
the authorRameeza Nasim
Rameeza Nasim, a Paralian, poet, passionate about poetry, drama and fiction. By giving drama critiques I feel like I am endorsing the writer's message to the audiences and also stressing on what Writers trying to say through his character portrayals and story, I love my job. Being a critic responsibility lies on my shoulders to point out the flaws and shortcomings of the play be it on writer's , performers or director's end . I did my Masters in English Literature and Linguistics and I earn my living through writing.
All posts byRameeza Nasim