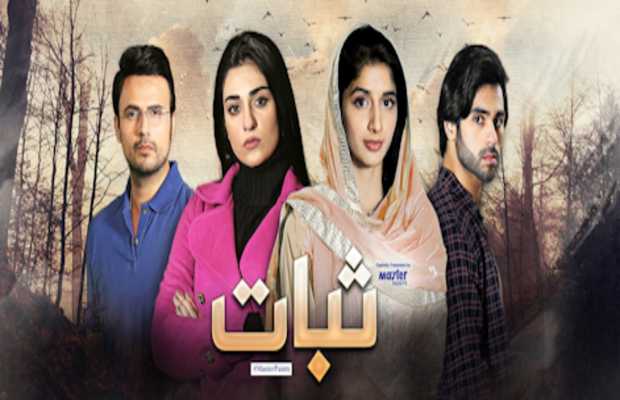 Sabaat the drama serial with its unique storyline and brilliant performances is one of our favorite prime time watches at HUM TV. We are loving Ameer Gilani and Mawra Hocane’s scenes and it seems that they are going to have difficulties in their married life. Dr. Haris is back into the scene and he has eventually proposed Miraal. Usman Mukhtar and Sarah Khan are looking good together as an onscreen couple.

Well it seems that Hassan is struggling hard to meet his ends with his limited amount of money which is again making no sense that Hassan is penniless he has nothing in his account, he has never saved anything in his account all his life? Anaya gets a job immediately, well apparently her boss looks nice but he is giving some creepy vibes too. Hassan’s annoying friend Atif is teasing him that he is suffering all this because of Anaya.

Anaya starts her job and on the very first day of her job the writer makes use of his creative license and shows that the Government bans construction business for a few months due to some unfavorable circumstances. Anaya and Hassan’s main field is related to the construction business. Hassan lost all hopes of getting a job and he is fearing a financial crisis. He is already running out of money and it seems that both Anaya and Hassan are financially passing through a rough patch. Hassan has no money to give for the maintenance and for that he has to ask Anaya for which he is not feeling good.

Dr. Haris meets Miraal once again and he opens up about his past life with her, that he belongs to a broken family and he has spent all his life living in boarding houses and hostels. He has kind of disowned his parents. Dr. Haris asks Miraal about the Government ban on construction business and about the loss they will face on which Miraal very confidently says that their company has enough capital that if they will not have to work for 10 years even then her company can conveniently survive.

Miraal shares about Dr. Haris with her father and they totally neglect her mother’s presence as if she does not exist. Miraal has such cold heart that she silently sees her father being extremely rude with her mother, shouting at her but still she is not reacting on it, it seems that she is kind of punishing her for siding with Hassan. Dr. Haris meets Miraal’s parents and it seems that they like him but then Miraal’s father shares with him, his wish that Dr. Haris will have to live with them in their house after marriage which Dr. Haris declines politely.

tweet
Share on FacebookShare on TwitterShare on PinterestShare on Reddit
Rameeza NasimJuly 28, 2020
the authorRameeza Nasim
Rameeza Nasim, a Paralian, passionate about poetry, drama and fiction. By giving drama critiques I feel like I am endorsing the writer's message to the audiences, I love my job. Being a critic responsibility lies on my shoulders to point out the flaws and shortcomings of the play be it on writer's , performers or director's end . I did my Masters in English Literature and Linguistics .
All posts byRameeza Nasim