Dr Haris lies to Miraal that he has left his job 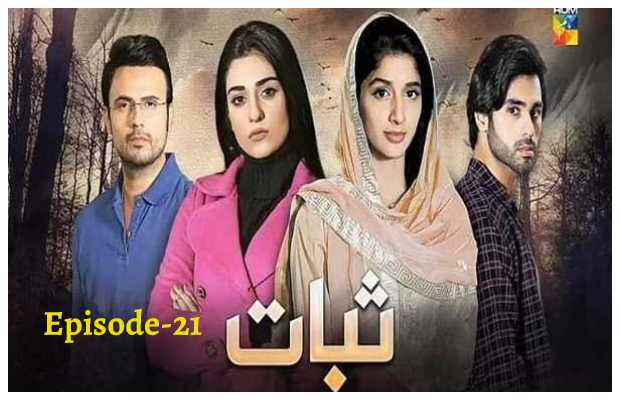 HUM TV’s drama serial Sabaat is one of the best Prime Time Watch. The unique story premises and strong character crafting are what make this play one of the finest ones in the running. The highlights of the episode is that Hassan resigns from Yasir Qureshi’s job and Dr. Haris is lying about his job to Miraal. Performances are on point, here I would like to appreciate Ameer Gilani’s performance in this episode.

Hassan forgets Anaya’s birthday and when Anaya reminds him about it he does not seems to regret it but when Anaya says that she is hurt that he is not even sorry that he has forgotten her birthday, Hassan tries to make up the situation by taking her to the dinner on the next day. Hassan has taken a half leave from the office telling Atif that he is leaving due to some personal commitment.

The office girl at Yasir Qureshi’s office Sana exploits the situation and Yasir Qureshi calls Hassan telling him to come immediately. Poor Anaya and Hassan leaves their dinner date at the middle. Hassan goes to Yasir’s office and gives him his resignation letter. On seeing his resignation, Yasir Qureshi starts being very polite to Hassan telling him that he is just like his elder brother and blah blah but Hassan has made up his mind to resign from this job.

Hassan on the next day presents his resignation letter again despite Yasir Qureshi stopping him but it is Sana’s attitude and bad-mouthing which becomes the actual cause for him leaving the office. Yasir Qureshi is super mad at her when he gets to know that she is the reason for Hassan leaving the office. He tells her that she has caused a huge loss to him and it seems that he is not going to spare her as well. Hassan is once again jobless and his male ego will start going to hurt him and it seems that Hassan and Anaya are going to face ups and downs in their relationship as financial crises makes a huge role in making or breaking a relationship.

Dr. Haris tells Miraal that he has left his job, so Miraal happily comes back at her house but here Dr. Haris is lying, he has actually taken a month’s leave from his clinic and he is thinking that in that one month he is going to convince Miraal to let him work and he really thinks that he can do that! What will Miraal do when she will come to know that Dr. Haris has lied with her and also that he has not left his job?

tweet
Share on FacebookShare on TwitterShare on PinterestShare on Reddit
Rameeza NasimSeptember 8, 2020
the authorRameeza Nasim
Rameeza Nasim, a Paralian, passionate about poetry, drama and fiction. By giving drama critiques I feel like I am endorsing the writer's message to the audiences, I love my job. Being a critic responsibility lies on my shoulders to point out the flaws and shortcomings of the play be it on writer's , performers or director's end . I did my Masters in English Literature and Linguistics .
All posts byRameeza Nasim