Sang-e-Mah Episode-1 Review: Beginning of an intense and intriguing tale

Its a quite an impactful start of a story 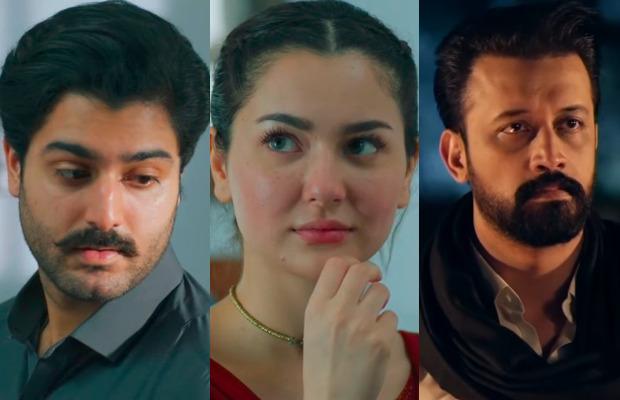 Sang e Mah the much hyped and much awaited drama serial finally aired its first episode at HUM TV, after having an exclusive premiere in cinemas a day earlier. The impactful and intriguing teasers have already raised our hopes with this project. Well after watching the episode it will not be wrong to say that this serial worth its hype. All characters in this play are extremely impactful and they all carry their own baggage.

This serial also marks Atif Aslam’s TV debut, and with his debut Atif has left a huge impact with his brilliant performance as Hilmand. The character is so deep and intriguing. Hilmand is more like a hermit living in a graveyard with a bunch of his friends. One wonders what is his story why he is living like this away from his home?

Hilmand’s younger brother Hikmat (Zaviyar Ijaz) is head to heel in love with Gulmeenay (Hania Amir) Zarviyar is looking super handsome and his chemistry with Hania Amir looks very cute. Although just like other love stories, Hikmat and Gulmeenay’s love story is too full of hurdles, one of the biggest hurdle is Gulmeenay’s own mother Zarghona (Sania Saeed). Well Zargohana’s character is the most mysterious one what is her back story? Why she is so weird if Hikmat is her sister’s son then why she is so against him marrying her daughter?

Hilmand and Hikmat’s father Haji Marjan (Nauman Ijaz) has a strange relation with his son Hilmand. It is shown that Hilmand ignores his father and avoid talking with him, his father comes to take him back but he simply ignores what he said and keep dancing with his friends. There must be something huge happened with Hilmand that is why he is avoiding his father and family like that. Hikmat’s mother Zarsanga (Samiya Mumtaz)happens to be Zarghona’s sister but she has not met him in years why what is the reason behind their animosity?

The opening scene of this episode is shot in a Ghurdwara Nankana Sahab in which a Sikh, played by none other than veteran Omair Rana, is praying, repenting on a sin he has committed 20 years ago. He prays that he gets peace and redemption. Well one wonders what is the sin that he has committed and why he is self punishing himself?

Last but not the least there is an important issue raised in the play the ritual of Ghaak its like announcing a girl as his own. The ritual in Pakhtoon culture is like if someone likes a girl he goes at her door and opens the air fire claiming her to be his and then no one else can marry her.

In the end of the episode we have seen Kubra Khan as Sheharzade who wants to do a story on this ritual Ghaak. Well a great start and an impactful episode we definitely wants to know more about these characters and their backstories.

tweet
Share on FacebookShare on TwitterShare on PinterestShare on Reddit
Rameeza NasimJanuary 10, 2022
the authorRameeza Nasim
Rameeza Nasim, a Paralian, passionate about poetry, drama and fiction. By giving drama critiques I feel like I am endorsing the writer's message to the audiences, I love my job. Being a critic responsibility lies on my shoulders to point out the flaws and shortcomings of the play be it on writer's , performers or director's end . I did my Masters in English Literature and Linguistics .
All posts byRameeza Nasim