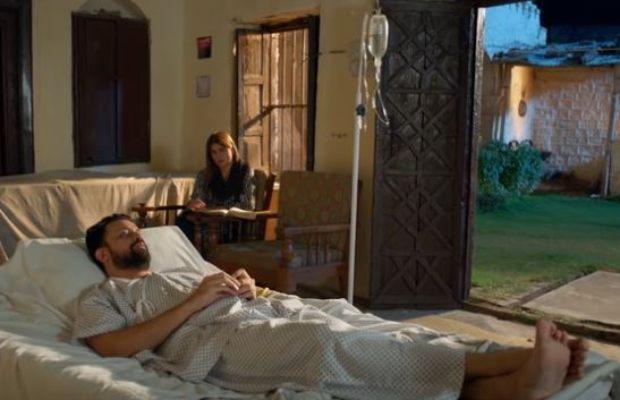 Sang e Mah the drama serial airing at HUM TV is now 15 episodes down though having a bit confusing but extremely intriguing characters this play has become one of the most engaging serials. Performances by the ensemble cast are absolutely brilliant. In the previous episode, we have seen Sheharzade’s haunting past standing in front of her. In this episode, Sheharzade manages to escape from that doctor by taking refuge at a nurse’s place.

The doctor is extremely furious with his staff for this sudden escape of his patient and he is more furious because the patient has not cleared his payment. By the way, the doctor seems to have quite a big hospital setup but he has only one nurse, one doctor, and a gatekeeper to investigate the whole thing. Well, one wonders how come Hilmand manages to escape in that critical condition too much taking the liberty of creative license.

Well, Hilmand is shifted and he is lying unconscious in a room with a cross sign hanging on a wall which establishes in minds all at once that the Christian nurse at the hospital helps Sheharzade by giving her a place at her house. Well, this huge favor thing given by the nurse risking her own career seems too good to be true.

The nurse is shown too kind and caring that despite Awaal Khan looking down on her for her being a nonmuslim, she continues to lend her support and care so much so that it has melted Awaal Khan’s heart for her and he declares her as his sister and also drinks tea from her mug.  One of the good things about this play is that the characters are not completely bad, there are shades some characters are darker grey, some are lighter but nothing is black.

Sheherazade and Hilmand’s interaction is the highlight of this episode. Hilmand has heard what Doctor has said to Sheharzade and he has acknowledged that they both have troubling pasts and truths they want to hide. Well, the dialogue ” Hum dono hi daaghdaar hain” seems a bit off.  Hilmand might have committed sins but Sheharzade getting sexually assaulted does not make her a tinted person it is not her flaw. Well, Hilmand slides his ring having Sang-e-Mah (Moonstone) on Sheharzade’s finger.  What does it say has she fallen for Baghdad ki Sheharzade? or he is just expressing his gratitude for her care?

tweet
Share on FacebookShare on TwitterShare on PinterestShare on Reddit
Rameeza NasimApril 20, 2022
the authorRameeza Nasim
Rameeza Nasim, a Paralian, passionate about poetry, drama and fiction. By giving drama critiques I feel like I am endorsing the writer's message to the audiences, I love my job. Being a critic responsibility lies on my shoulders to point out the flaws and shortcomings of the play be it on writer's , performers or director's end . I did my Masters in English Literature and Linguistics .
All posts byRameeza Nasim